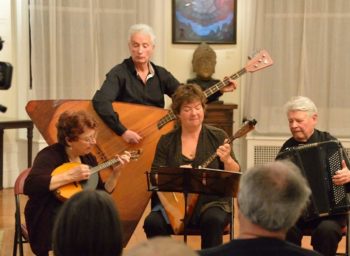 (June 20, 2016) – The Cultural Arts Coalition presents The World of the Italian mandolin and Russian domra. Back by popular demand, the Russian Trio – a virtuoso ensemble featuring Tamara Volskaya (mandolin, domra) Anatoliy Trofimov (bayan) and Leonid Bruk (contrabass balalaika) will be joined by Nataliya Vsevolodskaya (guitar, alto balalaika). The program is a journey through centuries and countries with two plucked instruments – the Italian mandolin and the Russian domra. Surviving throughout hard periods of history, these instruments have gained great popularity all over the world today. The musical selections will show the wide range of these instruments in performing music from the Baroque to modern periods. The program will also include original compositions and arrangements by members of the ensemble.

Tamara Volskaya is considered to be one of the leading contemporary performers on the domra. She is a Merited Artist of Russia and was a Professor at the Mussorgsky Ural State Conservatory of Yekaterinburg, Russia. Her flawless technical ability and expressive performances have stunned audiences around the world from Japan to Europe and America. Tamara regularly appears as a domra and mandolin soloist with orchestras across the US, the former USSR and Canada. Tamara’s achievements include a performance at Avery Fisher Hall at the “Mostly Mozart Festival” and as a soloist with the Seattle Chamber Orchestra performing two concertos for the mandolin by Vivaldi and by Pergolesi. She has had successful concert tours in Japan, Spain, Russia and Canada.In America, Tamara has done a great deal to popularize Russian Folk instruments in the cultural world of New York City. Together with her husband, Anatoliy Trofimov, she has organized “Russian Carnival”, a Folk Russian Instruments ensemble, which attracts audiences by emotional and festive performances. Soon after the “Russian Carnival” ensemble was established, the group became a prominent feature of New York City’s musical scene. The ensemble has performed at Avery Fisher Hall as part of the “Russian Splendor” program and in recital at the famous Weill Hall at Carnegie Hall.

The Studio Around the Corner is at 67 Main Street, Suite 101, Brewster, NY.