Originally began to bolster attendance at the Historic Track after betting was eliminated, the Great American Weekend offers activities for every member of the family and has grown into one of the County’s most prestigious events. Hudson Valley Magazine’s, Ted Speigel, wrote that the Great American Weekend is “arguably the Hudson Valley’s liveliest Fourth of July celebration. Twenty thousand people a day will stroll through the nine-acre village that surrounds the First Presbyterian Church, inspecting the offerings at 150 craft booths, grazing their way through a culinary snackopedia, and clapping approval for local entertainers.”

The Great American Weekend has become a focal point of the Summer Season in Goshen and has drawn crowds from near and far. In addition to being a weekend filled with fun for all ages, this community event has sponsored many amazing programs that benefit the entire community in many ways.

Revenues generated by vendors have culminated in Scholarships, grants and programs which serve the Greater Goshen area. 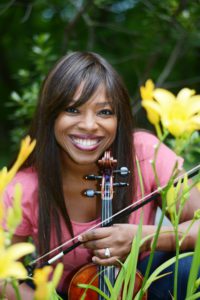 Voted Best of the Hudson Valley 2012 by Hudson Valley Magazine, Singer/Songwriter of The Year 2010, and Best Solo Act of Orange County, NY. 2009 ~ Times Herald Record,  E’lissa Jones is a beautiful singer, prolific songwriter, violinist, pianist, and guitarist. She is an exceptionally talented artist with a wide range that includes a dark and melancholy voice with a velvety quality. Her songs embrace audiences with her powerful melodies and expressive lyrics. Influential styling ranges from folk music,rock, in her catalogue of over 250 original songs.

This young artist has performed background vocals from 2001 to 2006 with blues legend Wilson Pickett, touring with Ray Charles, Al Green, and many more. E’lissa in her folk music realm has also opened up for legend Pete Seeger, Steve Forbert, and has played violin for old favorites like Bobby Vee.

E’lissa has recorded and released five albums, Shadows (1997), This Melodie (2003), Anymore (2008), Sweet as the Sun (2010), Like Water (2011). Her latest CD is going to be released in June 2015. Music videos include Sweet Surrender, After All This Time, and Rein Me In. Music and videos are available on ITunes and YouTube. In addition, her music can also be enjoyed in the 2014 film Strings Attached.

Currently, E’lissa Jones plays violin in three string quartets, Vivace, Andante, and Colorado Ebony Strings and continues to perform her original material with her backing band whether duo, trio, or the entire group in the New York Tri-State Area.