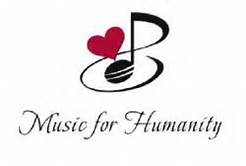 Music is an international language that transcends all boundaries and builds the invisible bridges, highways and tunnels that connect our hearts. More music means more connections and more connections means a better world for all of us. Music for Humanity’s mission is to spread more music throughout the world by “planting” music seeds. Locally, this is done by presenting the monthly Music for Humanity Free Performance Night. Nationally and globally Music For Humanity offers scholarships to young aspiring musicians who need financial help to continue their formal education, as a music major, at any accredited college or university in the United States. Those musicians become, in essence, ambassadors for Music for Humanity.

Music For Humanity’s current mission is offering music education scholarships. Money is raised for all scholarships through concerts, free performance nights and donations.

If you know of a worthy candidate, or would like to donate to Music For Humanity, please CLICK HERE.

Applicants must be attending an accredited college or university as a music major. Applications accepted by CLICKING HERE.  Hover over “What We Do” and then click “Apply online”.

THE MUSIC FOR HUMANITY STORY

In 2001, Kurt Irmiter had an idea to develop a web site where emerging recording artists could donate a percentage of their CD sales to worthy causes. In turn they would benefit from an internationally promoted web site and knowing their music was helping do some good in the world. The idea was, by the listener enjoying the music and musicians profiting from selling their music, Humanity would also benefit!  That was the idea, but it only got as far as registering of the domain name.  Nothing further happened due to other demands, interests, life… But the idea was still there and thought to be a good one.

Skip forward to 2005 and Kurt gets a phone call from Barry Adelman, who wants to know if Kurt would sell him the domain, noticing it was registered several years ago and there was still no web site! Barry was working on the release of his first CD and wanted to donate ALL of the proceeds from his CD sales to Humanity. So he dreams up the idea of a web site called musicforhumanity.org!  Well long story short, Barry and Kurt hit it off, found they have some common ideas in terms of the concept of music benefiting humanity and they teamed up to make the idea a reality!  MusicForHumanity.org is now happening, growing unfolding and you can be a part of where we go with this idea… People enjoying Music AND contributing toward doing good for Humanity and the World.