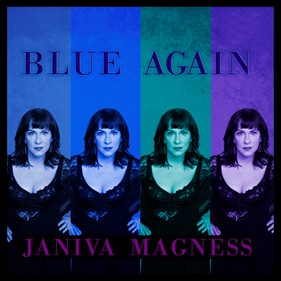 (August 8, 2017) – Following her strut down the red carpet at the Grammy Awards and her newest release “Blue Again,” soul-blues star Janiva Magness will be debuting her new material live on her Blue Again Tour. Magness will demonstrate how her robust and soulful voice can seamlessly shift from swampy blues to funky soul as she performs songs from her 2017 Grammy nominated album and 12th release Love Wins Again as well as her entire repertoire on Saturday August 12 at Daryl’s House.

It should go without saying. Anyone who has ever heard her sing — live or on any of the baker’s-dozen releases she has put out since coming on the scene 26 years ago — can immediately divine that this is a strong, resilient, commanding woman in masterful control of her voice and her destiny if not always her heart. In the space between the notes you can hear a performer who has survived a difficult life by anyone’s measure to become one of the top blues vocalists of her generation, only the second woman, after blues legend Koko Taylor, to win the Blues Music Awards’ coveted B.B. King Entertainer of the Year award. 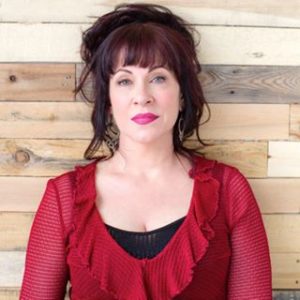 That defiant attitude drives Blue Again, Magness’ new record released on Blue Élan/Fathead Records on May 12. A succinct artistic statement, Blue Again collects Magness’ interpretations of a half dozen classics from the blues canon and beyond, including numbers made famous by Bo Diddley, Freddie King, Etta James, and Nina Simone. The album debuted on the Billboard Blues chart and Top 5 on Living Blues radio chart with single “I Can Tell” reaching #1 on the Blues radio chart.

“The whole record is about getting back to my taproot,” says Magness. “The process was just digging through a large pile of some of my favorite material, my favorite classic blues songs, to come up with these, my absolute favorites.”

A seven-time Blues Music Award winner, Magness has more than earned her right to sing the blues. Her life story comes straight out of a blues song. As she recounts in her soon-to-be-published memoir, she was born in Detroit, and among the fondest memories of her childhood were the sounds of her father’s blues and country record collection.

Childhood was short lived for Magness, however; as an adolescent she lost both parents to suicide. She spent the next several years bouncing around the foster care system, a traumatic experience that inspired her involvement as an adult with a variety of foster care programs. As a young woman, her life was seemingly spiraling out of control. She was saved one night in Minneapolis when, underage, she snuck into a show by bluesman Otis Rush. She started down the path of a music career, working as a recording engineer before being coaxed out in front of a microphone as a backup singer and finally forming her own group in Arizona.

Since then Magness’ life has not been without its downs, including the deaths of many close to her and the dissolution of a long-term marriage.  But she has persevered. Recently remarried to English bluesman T.J. Norton, she has continued her steady progression up the career ladder.

Blue Again comes hot on the heels of Magness’ 2016 album Love Wins Again, which became the biggest commercial and critical success of her career. The record, Magness’ Blue Élan debut, reached the top of the blues radio charts and remained in the Top 10 for seven months and also crossed over into the Americana chart. Love Wins Again also earned the singer her first Grammy nomination for Contemporary Blues Album of the Year. The record’s success was made all the sweeter because it marked the continuing flowering of Magness as a songwriter.

Having hit a new career high, Magness felt it was important to connect where she was going as an artist to where she has been.

“There’s definitely been an evolution, an arc over the course of time of the kinds of songs that I’ve elected to do and the kinds of songs I now write,” she says. “I wanted to bring that arc full circle. I wanted to make a record of what and where I come from. It was important to me emotionally and spiritually.”

To help her make this spiritual journey, Magness turned once more to Dave Darling, the producer of six Grammy nominated albums. With Blue Again, Darling has now produced six records for Magness and also serves as her chief songwriting partner.

“I just love working with that guy,” says Magness. “We’ve been friends for a very, very long time, and I really trust him implicitly. I trust his creative sense. I trust his musicality. He’s incredibly talented. Nobody’s been the boss of me for a long time, but I do trust him and I’m willing to let him lead me and I find that very critical to the relationship between a producer and an artist.”

The title track, a rip-roaring floor filler best associated with Bo Diddley, kicks off Blue Again, with Ramos, an associate of Magness’ since she provided guest vocals on his 1999 self-titled sophomore album, providing the down-and-dirty guitar. 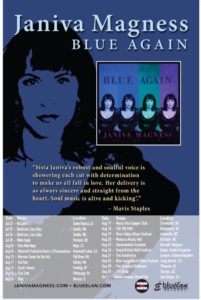 “It’s very raw. It’s very animal,” says Magness of the track. “And I really dig that.”

It’s followed by Al Kooper’s “I Love You More Than You’ll Ever Know,” a devastating slow-burner made famous by the great soul balladeer Donny Hathaway. It’s a song Magness says gets to the heart of the blues’ enduring appeal.

On the record’s third track, Magness faces the daunting task of living up to one of every blues singer’s idols, Etta James. A duet with Harvey Fuqua, “If I Can’t Have You” is one of the Chess Records great’s best-known songs and likely the most recognizable on Blue Again. For her rendition, Magness recruits as her foil fast-rising blues singer Rayford, whom she first met when she was a judge and he was an unknown contestant at the Blues Foundation’s International Blues Challenge.

“If you don’t know him, you’re about to,” Magness says of Rayford, who is nominated for two awards, including male contemporary blues artist and B.B. King Entertainer of the Year at this year’s Blues Music Awards. “He’s coming up real fast and strong in the ranks. I’m so grateful he was able to do the session because his voice was perfect.”

Up next is “Tired of Walking,” a tribute to one of Magness’ favorite singers, Joe Hinton, a contemporary of B.B. King and Bobby “Blue” Bland who died tragically young.

“I think his work needs more recognition,” Magness says. “My version is an ode to him and an acknowledgement of the idea we’ve all had that you’ve worked a really, really, really long time really, really hard and you’re a little bit tired and you’d like to have a ride.”

Credited to her husband/manager Andy Stroud, Nina Simone’s “Buck” is the most unconventional choice on Blue Again. Magness says she included it because it is “straight up sexy,” reflecting the tempestuous relationship of the two people behind it.

The record is rounded out with Magness’ version of the oft-covered “Pack It Up,” a song she best knows from Freddie King. Her take features a distinctive acoustic guitar riff that gives the track an unexpected country flavor.

Despite this record’s looping back around to her beginnings, Magness says Blue Again should not be seen as a coda. She still has a lot more songs to sing and write, and she is finding all new audiences for her music, including her recent first trip to India where she sang for 5,000 fans despite never been there before.

“There’s a lot more to this story,” she says. “And if you’re interested in the book, I hope to go to publishing this year.”

Today Janiva Magness is one of the most beloved figures in the Americana, blues and roots music world. She’s reached a larger and more diverse audience with each succeeding album and developed a reputation as a live entertainer that’s made her a staple of the international festival circuit.

“Sista Janiva’s robust and soulful voice is showering each cut with determination to make us all fall in love. Her delivery is as always sincere and straight from the heart.  Soul music is alive and kicking’.”  – Mavis Staples

The show will start at 8:00pm. To purchase tickets, CLICK HERE.