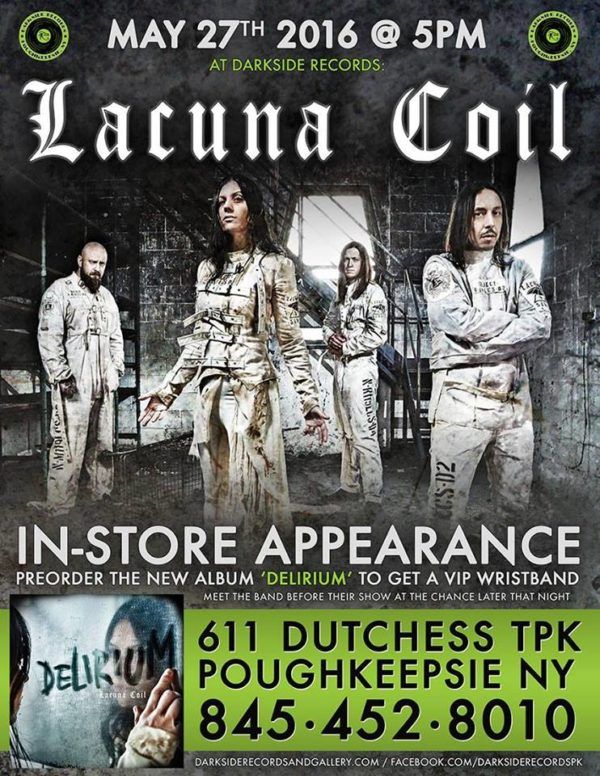 (May 18, 2016) – On May 27, Italian Heavy Metal band Lacuna Coil will drop its new album ‘Delirium’. The band will be in town for a very special event at Darkside Records in Poughkeepsie for a personal meet and greet fan experience. Attendees will be able to get a copy of their new album, meet the band, get an autograph – with an opportunity for an exclusive VIP experience.

Fans can get a VIP wristband that put them at the front of the autograph line when they prepay for the new album ‘Delirium’ (Regular CD- $12.99, Deluxe CD- $14.

To prepay for the album stop in, call the store, or order online  by CLICKING HERE. Wristbands will be distributed the day of the event and items must be picked up in the store.

The band will be performing at The Chance Theater in Poughkeepsie. 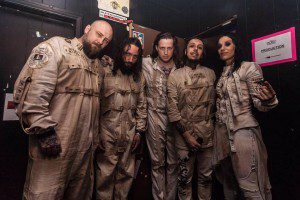 The year is 2014, and the album is ‘BROKEN CROWN HALO’ – it marks the latest chapter in the ongoing LACUNA COIL legacy, a dark and sultry ride that started in Italy and has resonated in an opaque wake of sonic splendor throughout the world.

Time has been good to LACUNA COIL, who are a flagship band on Century Media Records and a proven commodity worldwide, in the past two years alone having toured the globe as headliners, as well as in support of Megadeth, Motorhead, Volbeat, Sevendust and Paradise Lost. ‘BROKEN CROWN HALO’ is the band’s seventh studio album, and the highly-anticipated follow-up to ‘Dark Adrenaline’, which was released in January 2012 and debuted at No. 15 on the Billboard Top 200 album chart, helping the band eclipse one million cumulative sales in North America alone.

But as the title suggests, ‘BROKEN CROWN HALO’ isn’t about everything that’s good – it’s about everything that is real. In particular, the world as it exists in 2014. “We’ve always been fascinated by the differences and comparisons between real life and fairy tales, and on this album we decided to mix the two worlds when writing our lyrics,” says frontman Andrea Ferro, who along with frontwoman Cristina Scabbia form the most effervescent one-two vocal punch in hard rock and metal. “We’ve fused dark and horror elements with real life situations and have created a metaphor – we are fighting for a kingdom and a crown that is not what it seems, it represents the moment of confusion we’re living in and the very fragile situations we face every day.

“In the past year we’ve been dealing with a lot of pain that has brought us down as a band and left us broken and shattered. But it also made us realize how much time has made us stronger,” continues Ferro. “There have been times that we’ve been trapped in our past, only to discover that no one but ourselves can free us. When darkness holds you close, you need to open the wound and let it bleed out…”

And bleed it does, from the resounding drive of opening track “Nothing Stands In Our Way” and the resolute march of “Zombies”, into the thundering anthem “Die & Rise” and the soaring rhapsody that is “I Forgive (But I Won’t Forget Your Name).” ‘BROKEN CROWN HALO’ looks at life through blood red glasses and casts a beautifully melancholic hue over the world we wander. It is unapologetically brute with a vindictive air, and simultaneously supple and warm, beckoning you in and challenging you to join the movement. If you notice a flair for the cinematic in the eleven tracks, your perception is spot on, as LACUNA COIL wear the influence of their rich Italian culture and heritage on their sleeves.

“We’ve always been fascinated by soundtracks and Italian horror movies,” says Scabbia of the band’s influence on ‘BROKEN CROWN HALO’ – “Dario Argento is not only a favorite of ours, he’s also a cult favorite around the world, and bands like The Goblin wrote the soundtracks for a lot of those movies. Growing up with these movies and music, we really absorbed those influences.” Expands Ferro: “Movies like ‘Deep Red’, ‘Suspiria’, ‘Cannibal Holocaust’ and ‘Once Upon A Time In The West’, and musicians like Ennio Morricone, Stelvio Cipriani continue to leave their mark on us… Marco [‘Maki’ Coti-Zelati, bass] often likes to write songs while watching those old movies and war documentaries without the sound and playing over the visuals.”

“We set the bar pretty high with ‘Dark Adrenaline’ and it hasn’t been easy bringing our sound to the next level, but we have lived, learned and grown through a year of personal issues and change,” says the band in a unified voice. “We learned to be strong and get stronger, and we felt an inner vibe in this band that we haven’t felt before. ‘BROKEN CROWN HALO’ is Lacuna Coil introducing a new order, and letting nothing stand in our way…”