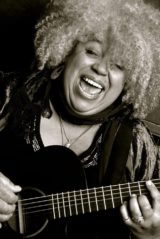 (June 6, 2016) – 12 Grapes in Peekskill brings award-winning Urban Folk/Jazz artist KJ Denhert to the stage the second Thursday of each month. The next event in this series will take place this Thursday, June 9 from 8-10 pm. Admission is free. 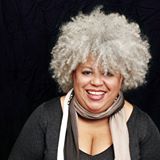 KJ’s song “Beautiful” won the Independent Music Award in the JAZZ with VOCAL category of the 14th Annual Independent Music Awards, 2015. KJ’s special blend of “Urban Folk & Jazz” has earned her not only this prestigious award, but also four additional IMA nominations. KJ’s song “Choose Your Weapon” was a finalist in the John Lennon Songwriting Contest, World Category. In 2009, she was named one of Jazz.com’s top female vocalists.

KJ has been described as “A crowd pleaser whose music is impossible to classify, but very easy to enjoy.” To say her songs are moving, impressive and simply impeccable is an understatement.

The public is invited to enjoy an entertaining evening or dinner and the show with KJ Denhert.

12 Grapes is located at 12 North Division Street in Peekskill.