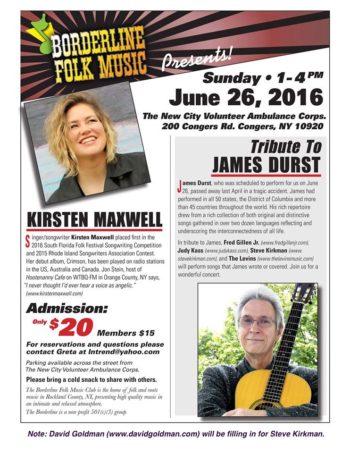 (June 22, 2016) – Kirsten Maxwell is a Long Island based singer/songwriter and performer. Last year she independently released her debut album, entitled Crimson, and has since developed a strong hometown following. Her music has appeared on radio stations across the U.S. and in Australia and Canada. She placed first in the 2016 South Florida Folk Festival Songwriting Competition and the 2015 Rhode Island Songwriters Association Contest. Kirsten has appeared in a number of Long Island publications including Newsday, Goodtimes Magazine, and The Long Islander. Jon Stein, host of Hootenanny Café on WTBQ-FM in Orange County, NY says, “I never thought I’d ever hear a voice as angelic and mesmerizing as I did when I first started listening to Joan Baez some 50 years ago, but then I heard the voice, the songs and melodies of Kirsten Maxwell.”

James Durst, who was scheduled to perform on June 26, passed away in April in a tragic accident. Quietly traversing the planet as a touring artist since 1965, James performed for rapt audiences of every age in all 50 states and the District of Columbia and more than 200 cities in 45 countries throughout the Americas, Europe, Scandinavia, the Middle East, Southeast Asia, in Russia, Azerbaijan, Japan, Korea and most recently, numerous times in India (7x) and Israel (5x). Drawing from a rich and ever-evolving repertoire of distinctive songs both original and gathered in some two dozen languages that reflect a global perspective and underscore the interconnectedness we share with all of life, James engaged each disparate audience in a participatory journey condensed from his travels, bringing us closer to our world and to each other.

In tribute to James, four of his closest friends from the Hudson Valley will each perform short sets of songs that James either wrote or covered during his career: Fred Gillen Jr. — http://www.fredgillenjr.com/; Judy Kass — http://www.judykass.com/; David Goldman — http://www.davidgoldman.com/; and The Levins — http://www.thelevinsmusic.com/, are all accomplished artists who collaborated with James and will provide a stirring and meaningful selection of tribute songs.