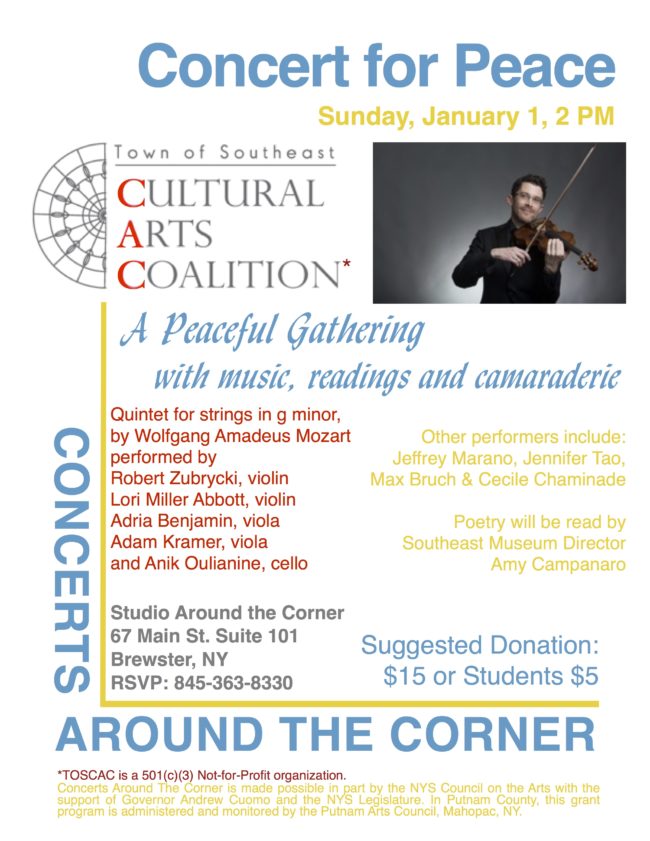 (December 12, 2016) –  The Cultural Arts Coalition presents: New Year’s Day Concert for Peace, Sunday, January 1st at 2:00pm at the Studio Around the Corner in Brewster.

Start your new year at a peaceful gathering, with music, readings and camaraderie. Our program will feature the beautiful quintet for strings in g minor, by Wolfgang Amadeus Mozart, performed by Robert Zubrycki, violin; Lori Miller Abbott, violin;  Adria Benjamin, viola; Adam Kramer, viola and Anik Oulianine, cello. The program opens with Leonard Cohen’s “Hallelujah” with Jeffrey Marano. Jennifer Tao, piano, will join the ensemble, performing in trios by Max Bruch and Cecile Chaminade and to celebrate the New Year, “Tales from the Vienna Woods” by Johann Strauss II and Auld lang syne.

Poetry by Demetrios Trifiatis and Emily Dickinson will be read by Amy Campanaro, director of the Southeast Museum. Ms. Campanaro has prepared a short essay about Jane Addams and the early 20th century peace movement.

Violinist, Robert Zubrycki, is currently Concertmaster for the New York City Chamber Orchestra, a member of the American Symphony Orchestra, the Stamford Symphony, principal violin and frequent soloist with the Amici New York Orchestra, and has performed in the orchestra for the American Ballet Theater at Lincoln Center. He has recently performed as Concertmaster for the New York Choral Society at Carnegie Hall, Encores! at City Center, the Northeastern Pennsylvania Philharmonic and for Pope Francis at St. Patrick’s Cathedral. A veteran of dozens of Broadway shows, Bob performed in the orchestra for “She Loves Me” and previously performed in “A Gentleman’s Guide To Love and Murder”, winner of the 2014 Tony Award for Best New Musical and he can be heard on the recent cast recordings of “She Loves Me”, “An American in Paris” and “Paint Your Wagon” (violin and mandolin). He has won an Emmy Award for his musical contribution to the documentary, “The Curse of the Bambino”. As the first violinist for the Queen’s Chamber Band and the Abaca String Band, Robert has recorded extensively and toured United States, including performances at the Chautauqua Institute and the White House. At this performance, Bob will be joined by his colleagues from The American Symphony, Amici New York, New York City Chamber Orchestra and Broadway.

Suggested donation is $15 for general admission and $5 for students. Reservations are recommended, as seating is limited. Call (845) 363 – 8330 or email TOSCAC2010@gmail.com for reservations.

For more information on this and other Cultural Arts Coalition events, visit: www.oththeater.org or on Facebook at “Old Town Hall, Brewster, NY”.