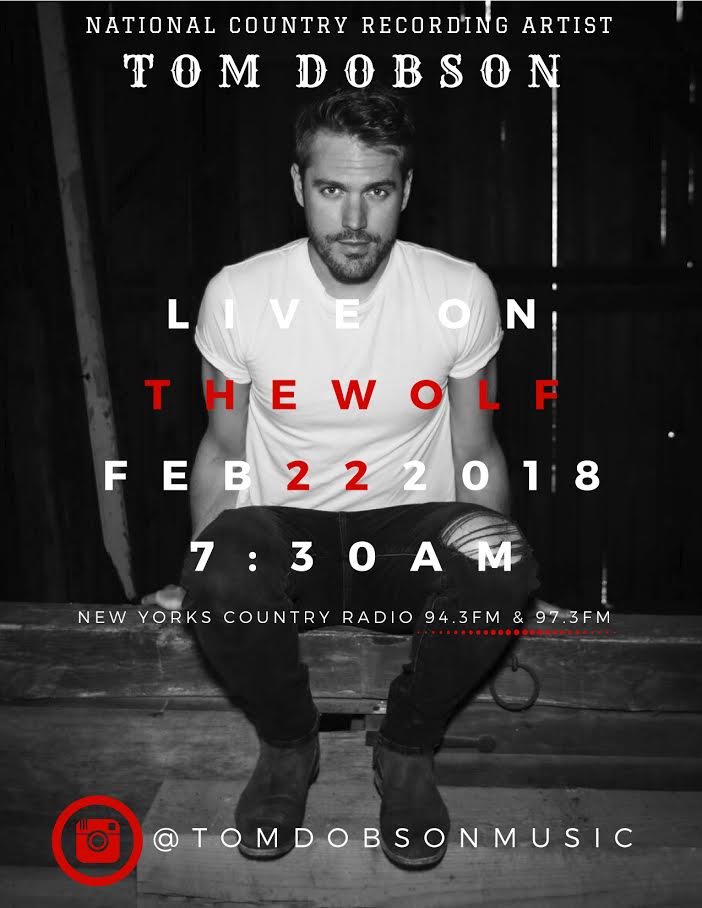 No radio at your desk?
Listen in on http://hudsonvalleycountry.com/

Tom Dobson is an American singer-songwriter, guitarist, and producer. He was born and raised in New MIlford, Connecticut. His debut single “American Man” is available now. 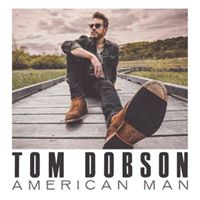 Contemporary country music has never been so diverse as it is today, welcoming new artists from all walks of life. It’s no longer a requirement that you have to be from Tennessee or Texas. Tom Dobson, who is set to become one of the breakout talents of the summer, has spent his life quietly honing his craft in rural Connecticut. His fiery new single, “American Man,” will carry him to a whole new level of notoriety.

Signed to New Jersey-based independent Rhyme & Reason Records, 30-year-old Dobson has delivered a strong statement of purpose with “American Man.” An upbeat, party-starting anthem built on the artist’s confident swagger and Southern rock boogie, the track celebrates weed, wide bed pick-ups, and bootylicious gals in tight, white t-shirts. Available in both ‘clean’ and explicit versions, “American Man” isn’t afraid to ruffle a few feathers as Dobson drops the f-bomb and wonders what it’s like to hang out with George Clooney. In other words, the track defies convention despite its traditional banjo and pedal steel arrangement and is bound to shake up the industry for the better. “I don’t want to be boxed in,” Dobson simply states.

“American Man” is the title track from Dobson’s debut album, due out this fall. The song started as a guitar riff and gained steam when Dobson sang a few lines to a close friend. “You have to record it,” she said emphatically. “That song is YOU.” He continued working on the track for a full year. A stickler for authenticity, Dobson explains, “Every line in that song applies to something real in my life. The lyrics mention the singer’s “sandpaper hands.” “I was sitting there thinking of the second line for the chorus and I remember that my hands were randomly aching while playing the guitar. When I looked down at them I was like, that’s it,” Dobson recalls. “My hands were rough as sandpaper because I had just finished restoring something. Woodworking is a kind of a therapy for me.”

Once he was eventually satisfied with his work on “American Man,” Dobson channeled the song’s spirit to craft his first full-length album. “I had a huge catalog of songs I could have revisited and picked from,” he says, “but I didn’t go that route. I got in the groove of ‘American Man’ and kept on writing and vibing with the energy.”

“My earliest recollection of music was my grandma singing nursery rhymes to my brothers and I,” he reveals. “From a young age, I just knew I was aware of sound and that I wanted to learn how to play this old guitar sitting in our attic.” His parents were ardent music lovers, especially his mom who used to drive him around in an old Volkswagen beetle listening to Jimmy Buffet and Garth Brooks. Dobson cites that he always wanted to be a singer-songwriter just like them. “I also really admire the late Johnny Cash for his rebellious tone and his ability to write a very dark or humorous song. He never put himself in a box and was true to himself. That really resonated with me. Country music is all about singer-songwriters which really lends to what I do.”

Dobson’s gateway to becoming a musician happened in middle school when his parents helped him buy a guitar for $20 at a flea market. Instrument in hand, he began keeping a journal of song ideas and lyrics. Soon Dobson had traded up from his first guitar and was playing in his first band, writing, singing and handling lead guitar. “We were a shitty high school band, it was like watching three dudes going through musical puberty trying to be the Brad Pitt of rock bands,” he recalls.

After a back injury derailed his plans to attend college on a promising lacrosse scholarship, Dobson attended a local school where there was a small recording studio with a soundproof booth. “Every spare minute I had, I was in that booth. There were even mornings I would wake up there. I would push my voice, singing at the top of my range, learning my limits and what I was capable of. I had access to a microphone closet and that studio for the whole year.”

It was at that recording studio when a random encounter with a music manager encouraged Dobson to drop out of school two weeks before the end of the year. Dobson picks up the story, “I had been feeling low at that point, but the manager insisted that I had talent and that I should stick with it. His kind words really picked me up. That led to a big decision. I called my dad and told him I wanted to quit school to pursue music. ‘Your mothers going to kill me but you should go ahead and drop out,’ he said. Turning my back on school definitely poured fuel on my fire to succeed. I was challenging myself.”

Shortly thereafter, things began to pick up steam. Dobson built himself a home studio. In 2007, he wrote and self-released a 7-song EP, Counterpoint. In 2015, his country music renaissance began in earnest. The catalyst came in the form of an invitation to work a Malibu Rum tent and pour drinks at NYC’s first country music festival. “Over that weekend I checked out every band on the main and side stages alike. I stood there all day watching Dierks, Paisley, The Cadillac Three, and so many other killer performers. I left that festival thinking, man wouldn’t it be cool to be on a stage with those fellas.” And then “American Man” came to him.

“I can’t say I was searching for a song at all; American Man was one of those songs that just came to me. Who knows maybe it was just the right time in my life.” Dobson closes with a bit of perspective. “I consider myself fortunate because a lot of people don’t follow their dreams. My songs are the stories of my life that lead me to this point. Though I don’t know where it’s going to end up, I’m blessed that music has taken me on such a wonderful ride so far. I’ve spent my time in the studio and now I’m ready to put the ‘man’ back in music, country or otherwise.”