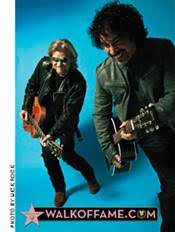 (September 6, 2016) – On Friday, September 2 Daryl Hall & John Oates were honored with the 2,587th star on the Hollywood Walk of Fame in the category of Recording.

Music executive Jerry Greenberg was on hand to help Emcee the ceremony and unveil the star with Hollywood Chamber President/CEO Leron Gubler.

“We are proud to welcome Daryl Hall & John Oates to the world-famous Walk of Fame. Fans from all over the world are excited to know that these two great music influencers will be immortalized in history with a star in the Hollywood Walk of Fame,” stated Leron Gubler, President/CEO of the Hollywood Chamber of Commerce.

Starting out as two devoted disciples of earlier soul greats, Daryl Hall & John Oates are soul survivors in their own right. They have become such musical influences on some of today’s popular artists that the September 2006 cover of Spin Magazine’s headline read: “Why Hall and Oates are the New Velvet Underground.” Their artistic fan base includes Rob Thomas, John Mayer, Brandon Flowers of the Killers, Ben Gibbard of Death Cab For Cutie and MTV’s newest hipsters Gym Class Heroes who dubbed their tour “Daryl Hall for President Tour 2007.” One of the most sampled artists today, their impact can be heard everywhere from boy band harmonies, to neo-soul to rap-rock fusion.

Daryl Hall wrote the single “Everytime You Go Away,” which singer Paul Young scored a number-one hit with a cover of the song in 1985. That same year, Daryl and John, participated in the historic “We Are the World” session as well as closing the Live Aid show in Philadelphia.

Of course, Daryl Hall has made an indelible impact on the music scene in the Hudson Valley with the opening of Daryl’s House at 132 Route 22 in  Pawling.