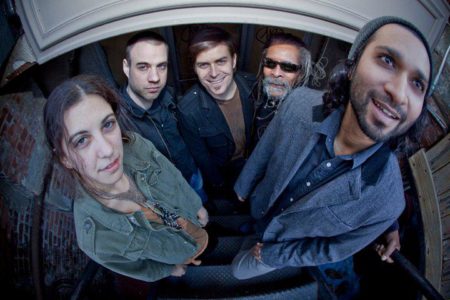 (July 19, 2016) – Brooklyn-based sextet Dub Is a Weapon brings its brand of studio-derived Jamaican dub music to the live stage at Club Helsinki Hudson on Friday, July 29, at 9:00 PM.

With a wide range of influences, including legendary reggae innovator/producer Lee “Scratch” Perry, Jimi Hendrix, John Coltrane, Mad Professor, Parliament-Funkadelic, and King Tubby, Dub Is a Weapon bring the particular brand of reggae- and ska-influenced Jamaican band music known as “dub,” which is a studio technique, to live performance.

“It can’t be done, man!” That’s what Dave Hahn, mastermind behind Dub Is a Weapon, heard when he first floated the idea of a live dub group, as he and his mates listened to some prime 1960s King Tubby cuts in the band van. “Everyone seemed to think you could only do dub in the studio,” Hahn recalls.

Hahn set out to prove them wrong, with skills learned live and on the road, and with help from a Jamaican beatnik percussionist, an old high school friend, and young upstarts from the Brooklyn scene.

Hahn had been kicking around the New York music scene for a while. He’d played ska with The Slackers and the Stubborn All-Stars, and Afrobeat with Antibalas. He worked as a dub engineer for the Easy Star All-Star’s Dub Side of the Moon tour. But he wanted to make a dub record of his own: The music had the modal appeal of Coltrane, but was built for the dance floor.

“Dub hooked me in,” explains Hahn. “It really reminded me of modal jazz with its static harmony, which gives musicians lots of freedom to explore and encourages listeners to contemplate what musicians are thinking about. At the same time, dub and reggae are dance music, even if you have that same meditative quality.”

This perfect mix of pensive and driving rolls through Dub Is a Weapon’s music. Hahn finds dub inspiration everywhere: in the complex interlocking grooves he mastered with Antibalas, the intense snowfall on Hokkaido, or in a simple melody plunked out on a piano. He crafts a bass line, then builds from there. The vibe is trippy, but with a fire and edge that give Dub Is a Weapon’s music real punch. This is music for serious dance floor moves, not spacey evenings on the couch. 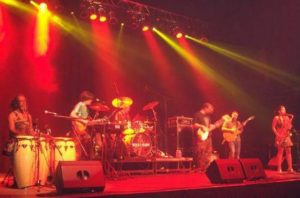 Figuring out how to make psychedelic studio sounds burn up the dance floor took years of experimentation, of trying things on the fly in illegal Brooklyn loft nightclubs or on tour as Lee “Scratch” Perry’s backing band. Eventually, Hahn got it: He wasn’t leading a band, he was riding the faders.

“At first I really struggled with getting the band to create dub that felt as powerful as what I could create in the studio. I finally figured out I had to think of each musician as a fader on the mixing board, cuing them to drop out and come back in so I could replicate the dub mix I had in mind.”

For reservations in The Restaurant or in the club call 518.828.4800. For the most up-to-date concert information, CLICK HERE.