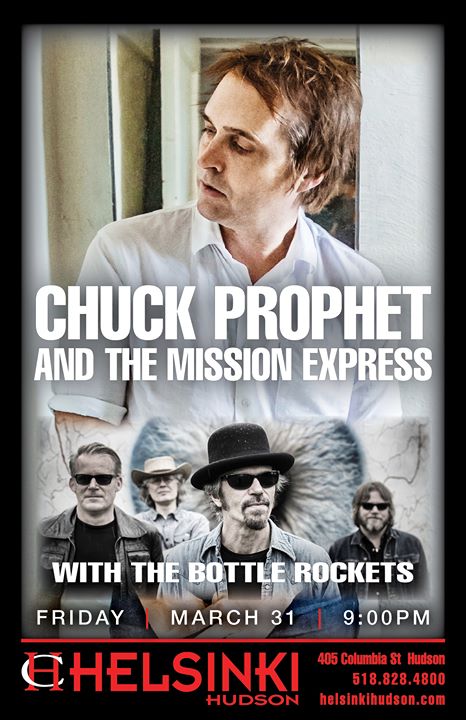 Co-Bill: Chuck Prophet & The Mission Express with The Bottle Rockets at Club Helsinki

Chuck Prophet writes and sings wry, trenchant rock songs that connect the dots, musical and otherwise, between Tom Petty and Warren Zevon. With the aid of the Mission Express, his band of heartbreakers, Prophet embraces a host of traditional and classic sounds, including country, soul, LA rock, indie-rock, folk-rock, and plain old rock ‘n’ roll. Lyrically, Prophet is deceptive, seemingly tossing off one-liners in his wry twang, but often in the service of full-fledged story-songs or sociopolitical narratives that are always cinematic, often funny, and subtly brilliant. He describes his new album, “Bobby Fuller Died for Your Sins,” as “California Noir,” which could well describe all of the output of this quirky original who has been associated in one way or another with musicians and bands including Ryan Adams, Lucinda Williams, Alejandro Escovedo, Cake, Kim Richey and Kelly Willis. Think of him as America’s answer to Ray Davies.

Since the mid-1990s, The Bottle Rockets have been making a unique brand of populist, Midwestern, brawny rock ‘n’ roll. Part of the alt-country explosion of the Nineties, the Bottle Rockets list Woody Guthrie, Neil Young, and the Replacements as key influences.