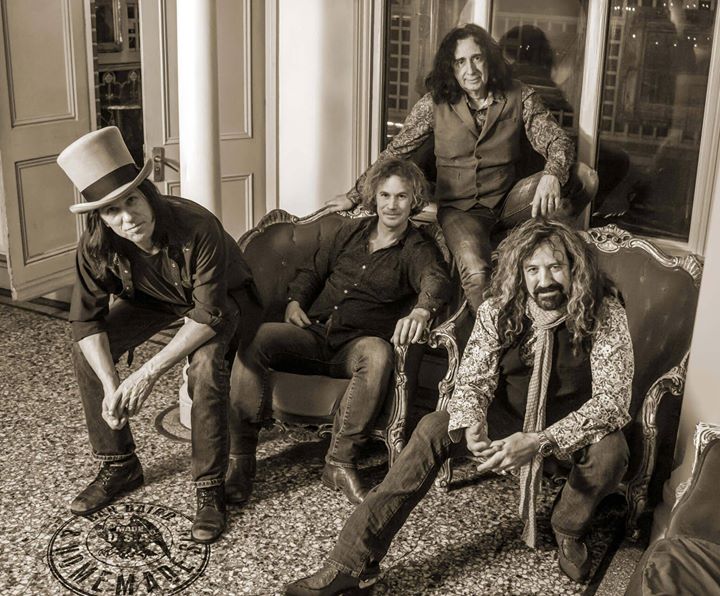 ONE NIGHT ONLY !!!
IF YOU ENJOYED THE GEORGIA SATELLITES , HERE IS YOUR CHANCE TO SEE ” DAN BAIRD & HOMEMADE SIN ”

Three Chords And A Cloud Of Dust…
The Georgia Satellites were one of the most ferocious bands of the 80’s. What set them apart from the other 100,000 bands who cranked their amps up to eleven was that their wild riffs and tanked up cries came from a band who, from the start, understood it’s place in the rock tradition and fought hard to solidify it with each recording.
16×10-db
123456
The story starts in the early 80’s at Hedgen’s, a “country club for the spiritually impoverished and emotionally destitute” as chief songwriter Dan Baird would later identify it. Bassist Keith Christopher, drummer Mauro Magellan and guitarists Dan Baird and Rick Richards were all playing on the Atlanta circuit in various bar bands such as The Hellhounds, The Brains and The Woodpeckers. These bands would gradually morph into the original Georgia Satellites, who signed to same the same management company as country-rock pioneers, Jason & The Scorchers, more of whom later.
#1 fan and road manager Kevin Jennings, sold an EP of early Satellites records to an independent UK record label, Making Waves, who released them as the Keep The Faith ep. The ep provoked an extraordinary response from the UK music press, which, in turn, woke up the previously indifferent US music industry. Elektra records quickly signed them and their first single, Keep Your Hands To Yourself, became a runaway hit. It reached #2 on the singles chart and their eponymous debut album reached the same position on the album charts. Both album and single only being kept off their respective #1 slots by Bon Jovi’s Slippery When Wet and Livin’ On A Prayer. A second hit single, Battleship Chains consolidated their success.
Where the Satellites really earned their reputation though, was with their live shows. All those years of three sets a night, paid dividends laid waste to audiences across the States and particular, Europe, which took the band to it’s collective heart, a love affair that continues to this day.
Two more Elekra LP’s, Open All Night and the remarkable In The Land Of Salvation And Sin, plus a cover of The Singing Blue Jeans, Hippy Hippy Shake, on the Tom Cruise movie soundtrack, Cocktail followed, but by the early 90’s, all those years of incessant touring had taken their toll and the band split. Dan Baird went on to a successful solo career with Rick Rubin’s Def American, scoring major hits with the album Love Songs From The Hearing Impaired and the single I Love You Period. A second LP, the critically acclaimed Buffalo Nickel followed and Dan also developed as a career as a highly sought after producer.
The rhythm section on both solo albums were Keith Christopher (bass) and former Georgia Satellites drummer Mauro Magellan, the duo responsible for a large part of Dan’s trademark sound.
Jump to 2007 and the band was completed by Jason And The Scorchers founder member and guitarist extraordinaire, Warner E. Hodges. The quartet released their debut album in 2008, championed by Alan Jones (Uncut), Scott Rowley (Classic Rock) and Bob Harris.
The band appeared at the Sweden Rock festival in 2009 and Hard Rock Hell in 2011 and 2012. In 2012 they headlined the prestigious Kilkenny Festival in Ireland. They have established an annual series of concerts in London that attract fans from all around the world.
In 2013, Circus Life, the long awaited follow up to the debut album, was released and attracted great reviews across Europe. The album was also their first CD to get a full USA release and their first album to album to appear as a vinyl release.
2014 saw long term bassist Keith Christopher replaced by ex Bonafide man Micke Nilsson as their touring schedule stepped up, seeing shows in Sweden, Denmark, Norway, Spain, Switzerland, Germany, Netherlands, Ireland, UK and USA. The last night of the 2014 tour will see the band play their first ever acoustic show before a sold out London audience.