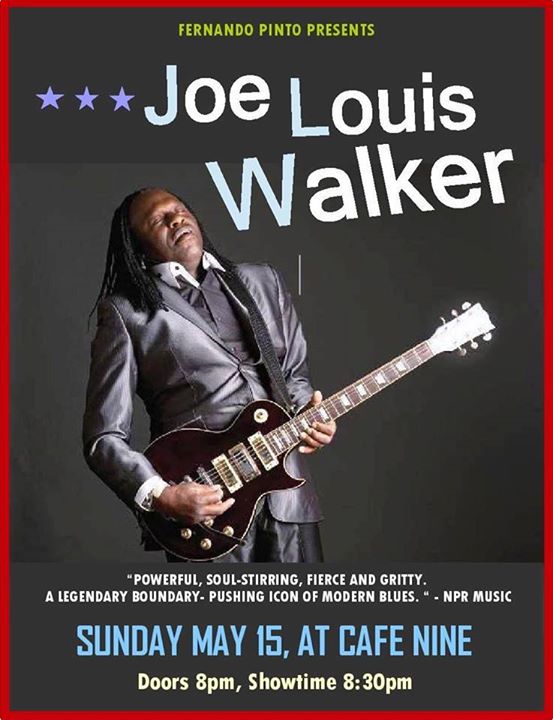 Joe Louis Walker, a Blues Hall of Fame inductee and four-time Blues Music Award winner celebrates a career that exceeds a half a century. His new album Everybody Wants A Piece cements his legacy as a prolific torchbearer for the blues. Looking back on his rich history, Walker shares, “I’d like to be known for the credibility of a lifetime of being true to my music and the blues. Sometimes I feel I’ve learned more from my failures, than from my success . But that’s made me stronger and more adventurous. And helped me create my own style . I’d like to think that when someone puts on one of my records they would know from the first notes, ‘That’s Joe Louis Walker.’”

In 2013, when The Blues Foundation inducted award-winning blues master Joe Louis Walker into The Blues Hall Of Fame, the recognition was humbling. “I am honored to be in the company of the great artists already inducted,” Walker said at the time. “I hope to live up to the honor.” Joining the ranks of previous inductees including B.B. King, Hound Dog Taylor, Koko Taylor, Willie Dixon, Muddy Waters, Etta James, Howlin’ Wolf and other blues greats while still at the peak of his musical powers, is, as Walker says, “a dream come true.”

Mark Zaretsky and “Magic Mike” Bloomer each have been playing the blues and leading bands in Connecticut and beyond for years — although this will be a rare chance to see them play together as a duo. Zaretsky, a native of Chicago, for the past two decades has been the harmonica player and front man for New Haven’s The Cobalt Rhythm Kings. He also has played with Mark Naftalin & Friends, Lara Herscovitch and in side projects with Slim Hippo, the Frying Fish and Harpo & Slim. Bloomer, who lives in the Willimantic area, is the front man and guitarist for Blues Au Go-Go and has played with the King Cake Band and One Eyed Johnny and the Gravediggers, among other bands. Come early to see two of Connecticut’s better blues musicians doing a rare gig together!