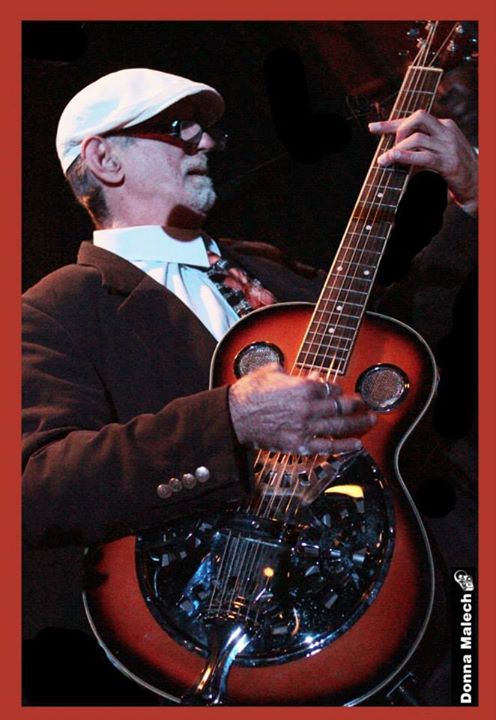 MICHAEL PACKER is a singer-songwriter, guitarist who was born in New York City in 1950. He did his first gig at the Bitter End in Greenwich Village at the age of 15. In 1969 he formed the group ‘Papa Nebo” which included saxophonist Bob Mintzer who went on to play with the Grammy award winning “Yellowjackets”. Papa Nebo recorded an album for Atlantic records. They were personally signed by Ahmet Ertegun.Today it is a collectors item.
Packer soon took his sound to the West Coast with buddy Sandy Allen, playing on the streets of San Francisco during the day and The Coffee Gallery in North Beach at night, Michael met George Thorogood and was turned on to the blues.
Eventually Packer and Allen made their way back to New York where they started another project “Free Beer”.”Free Beer” was born at Gerdes Folk City in Greenwich Village (1973) where they added singer-songwriter Bob Potter. Free Beer recorded 3 albums for Buddha and RCA records and toured extensively with the likes of the Atlanta Rhythm Section, Johnny Rivers, Dr.Hook, Clifton Chanier to name a few. All of the albums made the Billboard top 100 and they were well on their way. But nothing lasts forever in the music industry and Free Beer broke up.
After the demise of Free Beer in the late 70’s Michael opened for John Hammond Jr. and sang with the Matt Murphy Band. In 1984 in Boston he fronted a 10 piece band called “Coolstep” and opened for Huey Lewis on a New England Tour. After dropping out of the music scene in the late 80’s and early 90’s Michael Packer hit the skids. His drinking had escalated and he found himself living on the streets. He did a year in Rikers Island for attempted robbery but that seemed to be the turning point in his life. Even in prison he had a band. HBO did a special “The Prisoners of Rikers Island in which he appears.
Michael Packer has been sober 16 years now and life is good especially his music. He has become a well known and respected member of the New York City Blues scene. The Michael Packer Blues Band has received rave reviews in Living Blues, Blues Matters, Blues Revue magazines for the live @ Sweet Rhythm album (Woodstock Records). A Best of Michael Packer has been released and also reissues of his earlier recordings Papa Nebo and Free Beer.
Packer also released a solo album “The Sunny Side of Me” in 2007 featuring lyrics for the title song by a 8 year old girl from Albany NY named Gabby Kasper. Later that year Packer and his band with special guests Jimmy Vivino, David Maxwell, Sandy Allen, Dave ‘Snakeman’ Runyan and Felix Cabrera recorded a live session @ Lucilles (BB King’s) NYC . All of these recordings were released by Alan Lorber’s Iris Music Group.
A Michael Packer anthology was also released in 2008. In 2009 and 2010 Michael Packer was a semi-finalist in the solo/duo competition @ the International Blues Challenge in Memphis and the Iris Music Group released the CD “Rikers Island Blues” which included liner notes by Blues Wax editor Don Wilcock and was awarded best self-produced CD by The Jersey Shore Blues & Jazz Foundation. The 2011 release of the “My Time To Cry” CD which features unreleased 40 year old Atlantic Record recordings is getting rave reviews.
Michael Packer has recently found a new home with the Chicago blues label Blue Skunk Music who have released his new CD “Free Beer” and as a result of this he now has the honor of playing 2nd guitar and touring with the 2 time Grammy award winner the legendary Delta blues guitarist David “Honeyboy” Edwards who knew and played along side Robert Johnson.
Michael Packer has lived the blues and now he is back playing the blues with style.
Edit this wiki