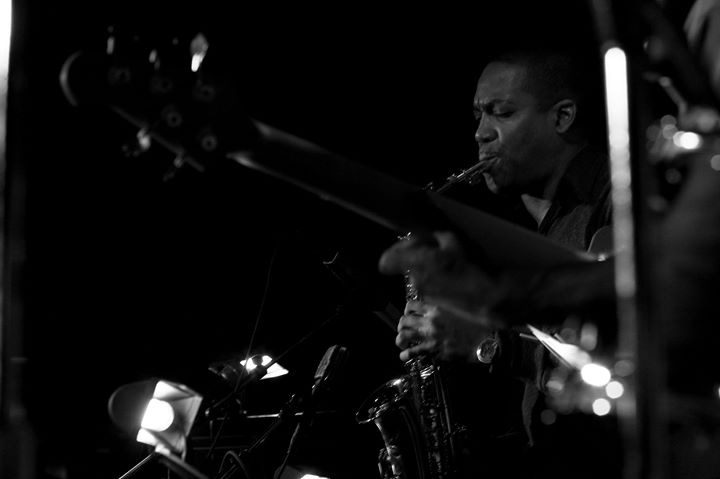 “Person is more than fine; he’s a major talent of his generation.”
— Russ Musto, All About Jazz

Join us next Monday as we welcome back a Monday jazz session MVP and towering force for the music here in the Hudson Valley, the great alto and soprano saxophonist, composer and bandleader Eric Person. Mr. EP is joined in a trio with one of the HV’s most commanding, hard-hitting rhythm sections: Rich Syracuse on bass and Jeff “Siege” Siegel on drums.

The legendary “Quinn’s deal” once more: no cover charge for admission but generous donations for these exceptional musicians are something a little more demanded than “requested”. This is how these superb artists get paid every time and how we keep these sessions going. If you can’t give the $10 minimum we request for the musicians, we ask that you please give as generously as you able to. Thank you for continuing to support a series that is well into its fourth year of presenting some of the finest musicians in the world, week in, week out.

For over thirty years, Eric Person has been committed to composing, recording and performing dynamic and innovative music. His personal sound on alto, soprano, tenor saxophones and flute have been featured on more than 50 recordings. He studied at the St. Louis Conservatory of Music and has taught and performed internationally. He has a broad range of experience performing with the masters of modern creative music, such as Dave Holland, McCoy Tyner, Chico Hamilton, Wallace Roney, Ronald Shannon Jackson, World Saxophone Quartet, John Hicks et al.

In 1994 bassist Dave Holland asked Eric to join his new quartet. This group released Dream of the Elders which highlighted a sound that was light, ethereal, but also energetic. Additionally, during the 1990’s Person performed and recorded with the World Saxophone Quartet and Chico Hamilton’s Euphoria. He also released his first three CDs as a bandleader for Soul Note Records: Arrival, Prophecy and More Tales To Tell.

In 1999, Person established his working band Meta-Four and started his own label Distinction Records. Next he released Extra Pressure and “Live at Big Sur” which features dynamic performances from two different Meta-Four ensembles.

In 2005, Eric released his sixth CD, Reflections. It features tracks from his Soul Note and Distinction Records releases. It’s a reflection of Eric as a bandleader, composer and improviser expressed through his favorite performances as a leader.

Person’s next three CD releases: The Grand Illusion, Thoughts on God and DuoScope finds him leading an electric band, a big band and a duo project.

Donald Elfman’s quote about The Grand Illusion: “saxophonist Eric Person seems to find something new to say and a different direction to follow with every project he undertakes.”

Rich Syracuse has been a mainstay in the New York area scene for more than three decades. At an early age, Rich started performing at many New York City venues. During these early years he was the winner of the prestigious “Congress of Strings” award. He later went on to receive a Bachelor of Music degree from Manhattan School of Music in New York City.

In the 1970’s Rich performed with “The Group for Contemporary Music” under the Conductors Charles Wournin and Harvey Solberger. During these early years, Rich performed extensively with “The Hartford Ballet” and the “New Jersey Lyric Opera Co”. Rich also performed with numerous jazz groups which included Pianist’s John Mehegan, Joey Calderazzo, and Ted Rosenthal.

Rich is the Professor for String and Electric Bass Studies at Skidmore College in Saratoga, New York; Hotchkiss School in Lakeville Connecticut, and the Millbrook School in Millbrook New York. He is an Individual member of the International Association Schools of Jazz.

“Jeff Siegel continues to make beautiful music. I highly recommend you listen and you will get hooked like I did.”
— Jimmy Heath

Drummer/Composer Jeff “Siege” Siegel is a veteran of the New York Jazz Scene and has worked with a virtual”who’s who” of artists. A member of the Sir Roland Hanna Trio from 1994-’99, Siegel’s diverse career has also led him to perform and/or record with legends such as Ron Carter, Kenny Burrell, Jack DeJohnette, Benny Golson, Frank Foster, Shiela Jordan, Helen Merrill, Mose Allison and many more.