On the Road and In the Round 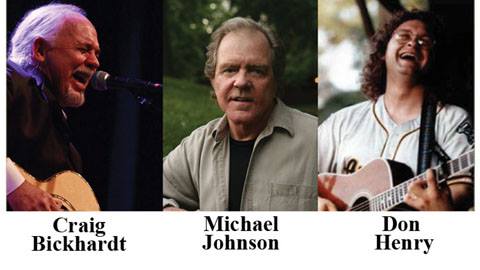 Michael Johnson has performed and lived more music and recorded more hits than you would imagine! His voice immediately identifies him as the man who sings “Bluer Than Blue,” “Give Me Wings,” “That’s That,” “This Night Won’t Last Forever” and other landmark songs. His music shows a diversity, depth and heart that only come from years of dedication to a labor of love.

Grammy Award winner Don Henry’s songs have been recorded by legends like Ray Charles, Patti Page and Conway Twitty; by country crooners like Gene Watson, John Conlee and B.J. Thomas; and by young hit makers of today like Blake Shelton, Lonestar and Kathy Mattea. The lead song on Miranda Lambert’s new CD is Don Henry’s “All Kinds of Kinds.”