WAZ UP! BOOGIE (Multi-Genre EDM at an Airplane Hangar!) 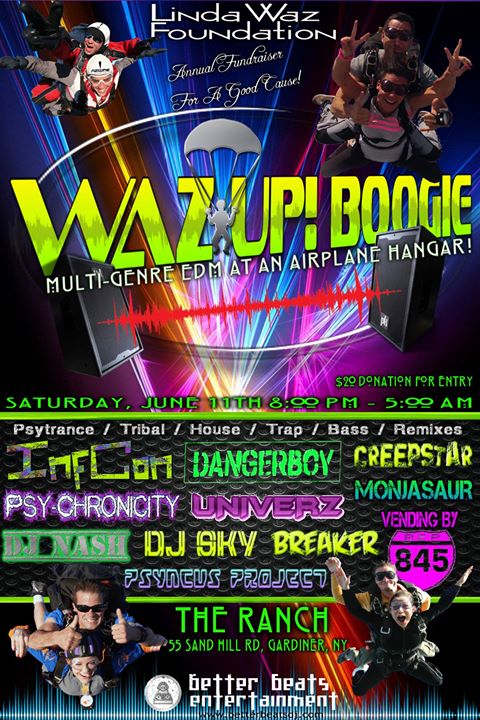 It is that time again for this year’s Waz Up! Boogie – Multi-Genre EDM At An Airplane Hangar!!! A weekend full of Skydiving, Music, Food, Dancing, Arts, Vendors, and one Insane Time!

Presented by Better Beats Entertainment and The Linda Waz Foundation! Pure intensity with multiple DJ’s spinning multiple genres all for a good cause!

Multi-Genre dance music at an Airplane Hangar in a glowing room and an illuminated glowing forest immersed in multi-dimensional color and sound with intense psychedelic hard-hitting beats spun by some of the best DJ’s in the area!

InfCon has been an intense DJ for many years involved in multi-genre events in the Tri-State area. He began his journey in the early 90’s Rave scene in NYC, but then moved on to Baltimore to work for the Ultraworld events. He now resides in the Hudson Valley and spun at some of the largest nightclubs in the area, underground psytrance parties in NYC, and numerous festivals.

Christian Jones began listening to Psytrance in 2010 which channeled him to write poetry where he felt whole.After three years of that, he decided to make music but unsure of genre. A few months later, a new friend taught Christian the basic foundation of Psytrance,and since then, he has been off to the stars trying to evolve as much as possible in being and frequency combined. Shortly after, he found passion in mixing.

Harry Nash or as he is better known DJ Nash is a New York Based DJ that has been spinning professionally for years at the biggest Nightclubs, Bars, and Venues around the Hudson Valley, NYC, as well as Connecticut. With a passion for Electronic Dance Music, DJ Nash loves to get the crowd off their seat and on their feet! When DJ Nash is at your party it will be one no one will forget.

Breaker is a NY and Orlando-based electronic music producer currently studying music production and sound engineering at Full Sail University. He brings to the table a unique and eclectic mix of Hip-Hop infused Bass House, Trap, and Dubstep with artist support from Noya, Antics, LUMBERJVCK, Ghastly, Virtual Riot and more.