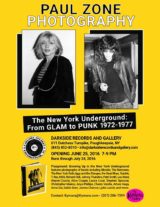 The opening reception will take place at Darkside Records on Saturday, June 25 from 7-9pm.

Celebrity guest Peter Aaron will be on-hand spinning vinyl. The exhibit will remain open until July 25 (between 10:00 am and 9:00 pm).