As a songwriter, Carll was nominated for Best Country Song at the 2016 Grammy Awards, for “Chances Are,” which was recorded by Lee Ann Womack.

Often compared to Texas precursors such as Townes Van Zandt and Jerry Jeff Walker, Carll shares with them a plainspoken style that often disguises a sharp and biting wit. 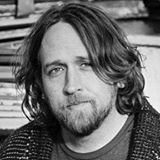 The 40-year-old Carll’s fifth album, “KMAG YOYO” – a sort of updated version of Bob Dylan’s “Subterranean Homesick Blues” — was a huge critical success: the Americana Music Association voted it the best album of 2011, and Spin Magazine voted it #3 in the category of Best Country/Americana. American Songwriter voted the song “Another Like You” the top song of 2011 and the album #6. Rolling Stone ranked “KMAG YOYO” (the acronym in the title is military slang for “Kiss my ass, guys, you’re on your own”) at #46 of best singles of 2011  and the album #47 on their list of “50 Country Albums Every Rock Fan Should Own.”

Breaking down genres, Carll is equally adept at playing rock clubs and honkytonks, Bonnaroo, Stones Fest, SXSW and NXNE. He’s been described as a cross between Ray Wylie Hubband and Todd Snider.