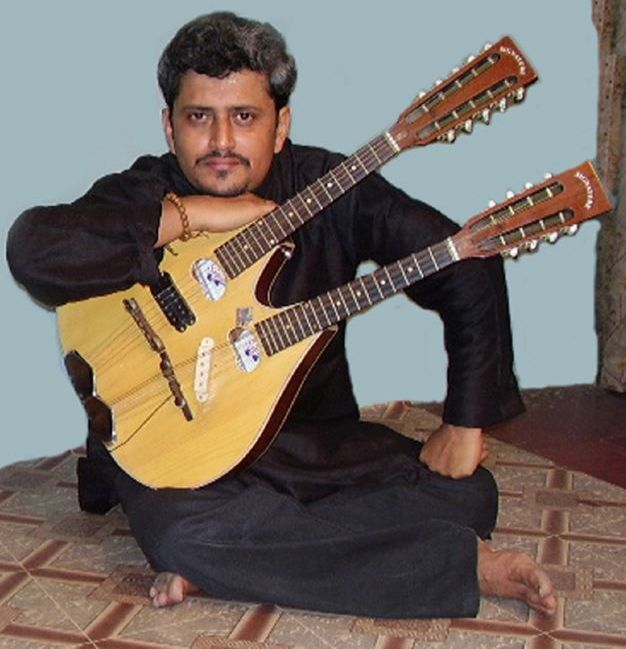 SOM features Mozumder on custom-built double-neck mandolin, will be joined by Nick Gianni on saxophones and flute, Dan Asher on bass, Vin Scialla on drums, along with several special guests TBA.

Snehasish Mozumder is among those few established musicians in India who has mastered the art of playing mandolin, and has blended it perfectly into the style of Hindustani Indian Classical Music, while incorporating Western elements like jazz and rock into SOM’s group sound and approach.
Coming from a musically oriented family,he started his initial training at the age of four with Tabla and then Mandolin under the guidance of his grand father late Sri Bibhuty Ranjan Mozumder and then he took training under his father Sri Himangshu Mazumder and his uncle late Sri Ranjan Mozumder. Gradually he switched over to his cousin SriTejendra Narayan Majumdar who is a well-known sarode player of the country. 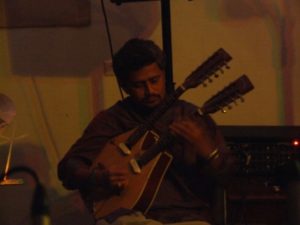 He continued his study under late Acharya Ajoy Sinha Roy who was a beloved disciple of Baba Allauddin Khan Saheb,the founder of Maihar Gharana and he takes lesson of laykari under the guidance of Pandit Anil Palit who is a senior most disciple of Pandit Kishan Maharaj, Finally he came under the tutelage of Pandit Ajoy Chakraborty.
Snehasish, has performed many major festivals in India like Sankat Mochan Utsav of Varanasi Swami Haridas Sangeet Sanmelan of Mumbai, Indian Habitat Centre of Delhi, Bhowanipur Sangeeet Sanmelan, GolPark Ramkrishna Missionof Kolkata and Saltlake Music Conference of Kolkata e.t.c, and also he has toured Europe, U.K., and USA and made a very good name amongst the music lovers . Snehasish is the recipient of Surmani and Jadubhatta Awards.
Snehasish plays an oversized mandolin with four pair strings in which two pair is thick and the other two are of typical gauges. The resulting sound is a dark yet mellow sound with altered tuning. Besides playing Indian Classical Music Snehasish has made a significant contribution to fusion. To better suit this style of music, he invented a Hybrid, double neck mandolin. The lower neck is for Indian classical music having four pair thick base strings and the upper neck has five pairs of strings. Sometimes it is played with five single strings creating a sound that resembles a guitar. 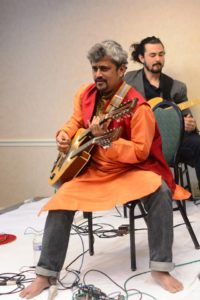 In November 2002, Snehasish Mozumder received an invitation from Pandit Ravi Shankar to the Royal Albert Hall (London) to participate in the George Harrison Memorial Concert. In August 2009, Snehasish performed at Lincoln Center as a solo artist and with his fusion band SOM. In October 2010, Snehasish and his fusion band SOM premiered the release of their New York based fusion CD at the world famous Blue Note jazz club in New York. He has also performed at New York’s Lincoln Center and was most recently a featured artist last year at the first annual New York International Mandolin Festival, where he both performed a solo set and also led a separate workshop.
“In the American musical imagination, the mandolin is an instrument that belongs to Nashville honky-tonks or in Italian wedding halls. Few know that the instrument also has a place on the Classical Indian stage. Snehasish Mozumder is one of his country’s mandolin masters.”
— Marlon Bishop, WNYC-FM
See Snehasish and SOM in performance in NYC as part of Lincoln Center’s Out-of-Doors festival: https://www.youtube.com/watch?v=x8-pHs8BhVc
There is no cover charge for this performance but a donation of $10 towards the ensemble is requested.
Quinn’s is located at 330 Main St. in Beacon, NY.