Each month, a variety of talented musicians will join Weiss to sit in with his trio, featuring Matt King on piano and Pete McDonald on drums.

The next piece of the series will take place this Wednesday night at 7:00 pm.

All are welcome! Stay posted for some extraordinary line-ups. 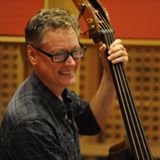 “He comes to us from a different Tribe; But he swings like one of us. Doug Weiss at the bass.” – Legendary Jazz Vocalist, Joe Williams

His association with legendary drummer Al Foster, led to world tours, 1000 concerts and 2 recording to date.

Doug was tapped by drummer and producer Brian Blade to record Lizz Wrights’ critically acclaimed debut album “Salt” (Verve) and toured extensively in support of that project. He also toured Europe and played the Village Vanguard with Brian Blade and the Fellowship band.
He also performs with guitarist Peter Bernstein’s “Monk” project, whose CD “Monk” was released in 2008 on Xanadu.

To view more videos, click on the following links: