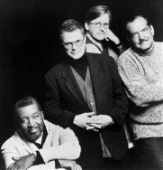 On May 15 at 7pm, the Alan Broadbent Trio will perform at The Falcon in Marlboro. The trio features Alan Broadbent/Piano, Harvie S/Bass and Paul Wells/Drums.

After studying at Berklee and settling in Los Angeles, native New Zealander, Alan Broadbent, was invited into the studio scene as a pianist for the great Nelson Riddle, David Rose and Johnny Mandel. In the 90s

he was asked to be a part of Natalie Cole’s “Unforgettable” CD, touring as her pianist and, later, as her conductor. Alan wrote the orchestral arrangement for Cole’s video with her Father, “When I Fall In Love”, winning Alan his first Grammy.

He became a member of Charlie Haden’s Quartet West, touring Europe, the UK and the US, and won his second Grammy, for the orchestral accompaniment behind Shirley Horn, of Leonard Bernstein’s “Lonely Town”.

As a soloist and with his jazz trio, Broadbent has been nominated for Grammys twice for best instrumental performance. In 2007 he was awarded the New Zealand Order of Merit, an honor he holds in high regard.

Broadbent is currently Diana Krall’s conductor for her orchestra concerts and on her “Live in Paris” DVD. He was the arranger on the late Glenn Frey’s CD, “After Hours”, and wrote six string arrangements for Sir Paul McCartney’s “Kisses On The Bottom” with the London Symphony. Through his orchestral arrangements and jazz improvisations, in popular music and standard songs, Broadbent is discovering deeper feelings of communication and love.