Jim Weider was a member of the second incarnation of “THE BAND” and is a current member of “THE RAMBLE BAND”, (aka “THE LEVON HELM BAND”). In addition, he leads his own group – “PROJECT PERCOLATOR”. He is a Master of the Classic Telecaster Guitar and renowned for his rock and blues-based signature sound. He is among a select group of musicians with an endorsement from Fender and, for the past three decades, he’s earned enormous respect from fellow musicians and music fans throughout the world.

Brian Mitchell is a current member of “THE RAMBLE BAND” (aka “THE LEVON HELM BAND) and is well-known within the circles of the music industry and beyond for his solo career and his high-profile collaborations. He has recorded and performed with some of music’s most respected artists, Levon Helm, Bob Dylan, Al Green, B.B. King, and countless others.

Byron Isaacs is a current member of “THE RAMBLE BAND” (aka “THE LEVON HELM BAND”), “THE DIRT FARMER BAND” and “Ollabelle” . Byron is a well-respected singer-songwriter – haven written songs that appear on Levon’s Grammy-winning CDs, Dirt Farmer and Electric Dirt.

Randy Ciarlante was a member of the second incarnation of “THE BAND”. Up until Levon’s passing, he double-drummed in “THE LEVON HELM BAND”. He played drums alongside Levon and sang on The Band’s albums, circa1990s, including Jubilation and High On The Hog. Randy also leads his own amazing band, “CKS”.

Sid McGinnis has played with Peter Gabriel, Paul Simon, Warren Zevon, Carly Simon, Dire Straits, Bob Dylan, David Lee Roth, David Bowie, Leonard Cohen and a host of others. He is a current member of “THE DAVID LETTERMAN BAND”. He has often joined “THE LEVON HELM BAND” at many of the Midnight Rambles in Woodstock, New York. 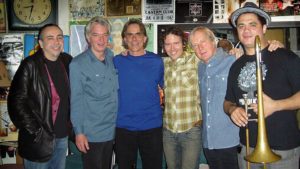