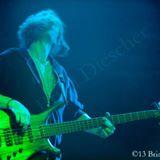 I have been listening to music my whole life since as long as I can remember. I picked up my first instrument (Alto Sax) at the age of 11. At 15, I took guitar lessons from virtuoso, Collin Bergkamp. At 18, I pursued a musical career in Charlotte, NC briefly and took private lessons with bassist and music grad, Brian Jacobs. At 19, I picked up the Bass and it has never left my hands since. At 20, we founded MazMyth and by 22 we had regular schedule of shows at the RockBar (deceased) in Liberty, NY from 2006-2009, as well as The Chance in Poughkeepsie, NY.
MazMyth has opened for Cky, King’s X, The New York Dolls, Queensryche… and in 2010 we entered The Break contest held by Linc Star/The Chance and we took a runner up spot in the Poughkeepsie, NY division and was awarded a spot at The Bamboozle festival.

In 2011 we won our Poughkeepsie division and went to play in the final rd. of all 5 jurisdictions at The Gramercy Theatre and was voted grand champion. In 2012 we showcased for the final rd of The Break Contest Finals at The Stone Pony.Thereafter, we played at The Bamboozle Festival again, this time it was on the beach of Asbury Park, not The Meadowlands like usual.

Some of my relationships since then have breached outwards in trying to make a successful outdoor Music Festival, MazFest Music Festival.This is our 4th year my band-mates, close family and friends have volunteered and helped put on this event since Aug 2010 in a neighboring town and has been growing a fan base steadily every year. I could not do it without them! MazFest is focused around bringing in abroad talent and local talent. We want to give exposure to the local acts that deserve it who play hard and are hungry for an opportunity to play with some of the best acts nationally. We know what its like. In 2012 we opened for O’Death, Consider The Source, and Dopapod at MazFest! Currently we are recording the MazMyth E.p. Jan 2013 and look forward to the Shreddariffic monster: Evolves! stay tuned!

I want to personally thank some people:
Gesine, Jenna, Fiorela, Jarrid, Jeanne and Doug, Kytt, Danny, Matt, Steve, Flora, DuMondizio, Craig and Andrew Fine, My family and friends, all you crazy Thumpateers that funk with my thumb.