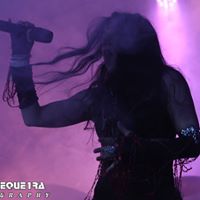 “It’s time to get to know Vajra” according to Loudwire Magazine. Dubbed a “Must-See Act” by Rolling Stone Magazine and one of the “Most underrated bands” by AXS Magazine, Vajra uniquely blends hauntingly dark and hypnotic melodic, progressive rock with Eastern Indian themes into foreboding and mysterious lullabies. “Their live show is like a cathartic punch in the face” according to Creem Magazine, and they were accordingly selected to perform at the Loudwire Music Festival 2015 and Rock-fest 2016, CMJ and SXSW. Vajra’s DIY videos for two of their singles were both on the Loudwire Top 10 Rock & Metal Video Countdown for a combined total of 24 weeks and were subsequently retired as the longest tenured videos on the Countdown. The band also was #1 of the Reverbnation Alternative Rock Music Chart for NYC for 10 consecutive weeks and one of their singles was #37 on the Under The Radar Chart.

Vajra was formed by composer, singer and multi-instrumentalist, Annamaria Pinna during her self-imposed exile in India. The child of a former monk and school teacher, Annamaria was encouraged to learn about the world around her and to question her assumptions. She believes there is divinity in creativity. Annamaria has a neurological condition called synesthesia, where she attaches color and shapes to sound.

Vajra is a force and is quickly generating a buzz after selling-out their first show in November, 2011 (at The Bowery Electric in NYC).