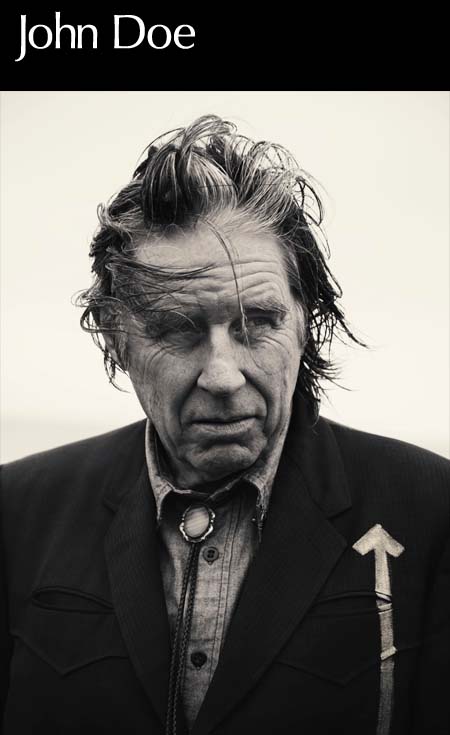 With Exene Cervenka, John Doe was a cofounder, co-vocalist, and chief songwriter of legendary California punk-rock outfit X, which still tours to this day. While punk-rock was mostly a New York City- and London-based phenomenon, the band X was the leader of a small Los Angeles outpost of punk. The group’s unique style, which incorporated a roots-music influence into its punk-rock mix, foreshadowed a punk-roots fusion that would be more common years later, as well as hinting at the alt-country movement of the 1990s.

On his own, John Doe has been a prolific solo recording artist, with 10 albums to his credit, and an actor with roles in over 50 films and TV productions. On his current tour, Doe will perform solo renditions of songs from his latest self-described “psychedelic soul” album, “The Westerner,” along with selections from his entire career.

John Doe was born in 1977 when he arrived in Los Angeles. He describes his previous life in Tennessee, Wisconsin, and Baltimore as “a great and fertile time,” but new music and social changes led him to events that created a life in art. He graduated from Antioch College in Baltimore in 1975, worked as a roofer, aluminum siding mechanic, and ran a poetry reading series.

In 1988, John started a family and lived in the Tehachapi Mountains, near the “Grapevine” of Highway 5, which separates southern and central California. He has recorded numerous solo records with such renowned singers and players as Patty Griffin, Dan Auerbach, Aimee Mann, Don Was, Kathleen Edwards, and Greg Leisz. He has appeared in over 50 films and television productions.

Other musical side projects include work with the Knitters, Jill Sobule and The Sadies. He continues to write poetry and has even taught workshops from time to time. He currently lives north of San Francisco.

For reservations in The Restaurant or in the club call 518.828.4800. Club Helsinki Hudson is located at 405 Columbia Street in Hudson.