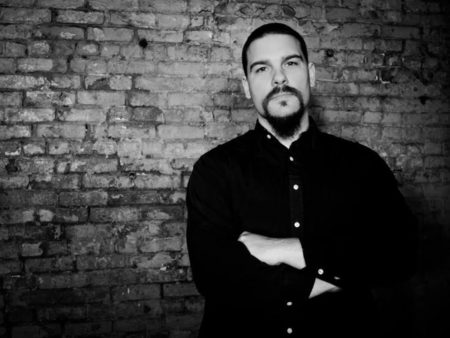 (July 10, 2016) – “Mike Pride, a drummer-composer who balances metal-derived aggression with postbop finesse, leads a piano trio dedicated to reinterpretations of songs by MDC, the famed Austin hardcore band he used to drum for. This should be one offbeat treat.” — Time Out New York

The next Monday jazz session (July 11 at 8-11 PM) features Hudson Valley drum titan and opening artist on Amy Schumer’s current US tour, Mike Pride and his I Hate Work trio, performing pieces by his onetime employer, the legendary hardcore punk band MDC. Mike is joined in I Hate Work by Jamie Saft (last heard with Mike at the Monday jazz sessions in June as part of Jeff Lederer’s Sunwatcher ensemble) on keyboards and Peter Bitenc on bass.

Born and raised in Southern Maine, but based out of New York City since 2000, Mike Pride currently performs solo, leads modern-jazz quartet From Bacteria To Boys, the 7-drummer installation-band Drummer’s Corpse, and the MDC piano trio I Hate Work. He also co-leads the ensembles Pulverize The Sound (w/ Peter Evans & Tim Dahl), and Period (w/ Charlie Looker & Chuck Bettis). Pride is renowned for his ability to excel in a wide range of genres and ensembles. He has worked with everyone from improvised music icon Anthony Braxton to punk legends Millions Of Dead Cops, toured extensively on four continents, appeared on more than 100 recordings, and is currently touring the country opening for comedian Amy Schumer with Jason Stein’s Locksmith Isidore.

Saft is a mainstay of the downtown scene and a member of bands such as The Beta Popes, Whoopie Pie, Swami LatePlate, The Shakers and Bakers, Kalashnikov, Pramrod Sexena, and John Zorn’s Electric Masada.

Saft was the pianist for the New York and Paris premiers of John Adams’ opera “I Was Looking at the Ceiling and then I Saw the Sky” at Lincoln Center and MC93 Bobingy.

Saft has recently composed a number of original film scores and music for television. Recent films scored include the Oscar nominated film “Murderball”, Sundance Grand Jury Prize winner “God Grew Tired Of Us”, and the HBO documentary “Dear Talula”. Saft has also contributed score music for Nickelodeon, MTV, and A&E.
__________________
Peter Bitenc grew up in Milwaukee, Wisconsin where he was gigging in local clubs not long after taking up the bass at age 15. Peter attended the New England Conservatory of Music where he studied with Steve Lacy, Cecil McBee, and Jerry Bergonzi and graduated with a degree in Jazz Studies in 2004. Peter moved to New York City in 2005 where is currently active in the Jazz, Rock and Bluegrass scenes. Peter has played on various albums such as Casey Dienel’s “Wind Up Canary” and Heather & the Barbarians’ “Tell Me Tonight.” He is also a member of the Daniel Levin Quartet, Holus Bolus, The Dive Bar Dukes, Heather & the Barbarians, From Bacteria 2 Boys, Ben Brown & the Makeout Machines, 28God and Oh Liza Jane.

Peter’s solo project is called Hunter Gatherer. He thinks of it as music for a movie that doesn’t exist. Hunter Gatherer draws from Americana Rock, Country, Blues and Jazz with some instrumental interludes. Peter sings and plays bass or guitar with a rotating cast of collaborators including Carlo Costa on drums, Jonathan Goldberger or Hans Holzen on guitar and Elisabeth McFadden singing backup.

Quinn’s is located at 330 Main Street in Beacon.