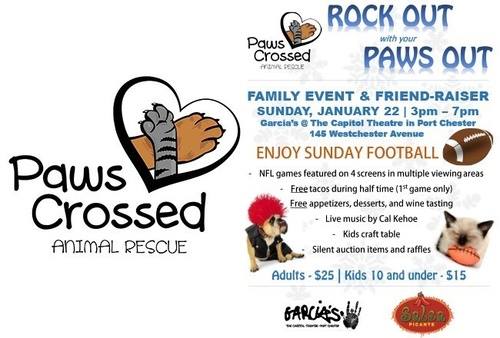 The Paws Crossed 1st Annual “Rock Out with your Paws Out” FriendRaiser will be a festive afternoon filled with something for everyone: Free music by Cal Kehoe, delicious hors d’oeuvres and desserts, plus free tacos from Salsa Picante at halftime of the AFC Championship game, great drink specials, silent auction and raffle prizes perfect for your special Valentine, free wine tasting, and a Kids Crafts table organized by the Rye High School Animal Welfare Group. 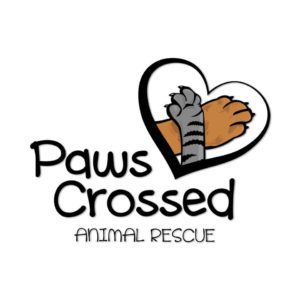 Located in Westchester County, New York, Paws Crossed is a 501(c) 3, not for profit, true no-kill animal rescue organization. Through rescue, adoption, advocacy, rehabilitation and education, our mission is to “RESCUE ONE BY ONE UNTIL THERE ARE NONE”. In 2016 we obtained and renovated our beloved facility located at 100 Warehouse Lane South in Elmsford, increased rescue efforts greatly, finding homes for over 250 pets, opened the Rockefeller Rec Center for training, and established wonderful community partnerships and programming.

Cal Kehoe’s mission statement is simple. To connect with his audience to the point that they are having as much fun listening and dancing to the music as he is having playing it. And if the reaction to his performances are any indication, he’s nailing it. 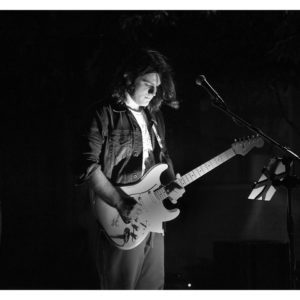 Cal attended Berklee College of Music where he began to distinguish himself early by being invited to the Berklee Perfomance Center as one of just 6 students for their Rock Guitar Night. Soon after, he was selected as a winner in their Singer-Songwriter contest, and all of it happened in his first semester.

Cal has been rapidly gaining a reputation as one of the brightest new Jam Artists among today’s guitar players, singer-songwriters and live performers. Cal has just put the finishing touches on a new EP, Batting Practice, Produced in part by Grammy Award Winner Paul Nelson of “The Johnny Winter Band” and Ethan Isaac of the Factory Underground and rock band “Edisun”.

Recently Cal was named as a finalist in the first annual Coffee Music Project awards held at Webster Hall in New York City. At the Coffee Music Project, Cal left audiences in awe when he accompanied himself by “live looping” his Martin acoustic guitar and soloing on his Paul Reed Smith electric guitar.

Cal’s “live looping” styles have been compared to Andrew Bird, Ed Sheeran, Tune Yards, Reggie Watts, KT Tunstall, and Keller Williams, however Cal brings his own distinct and unique style and interpretation to the stage. His performances are a blend of original music and interpretations of some of the greatest music of our times spanning over a vast array of artists from The Grateful Dead, Allman Brothers, Phish to Marvin Gaye and Michael Jackson, Bruno Mars and Lorde. He has been touring the Greater New England area performing for Live Nation VIP, House of Blues Foundation Room, Webster Hall, Daryl’s House and numerous local clubs and venues.

Through Live Nation and House of Blues, Cal has performed with industry heavyweights including Bob Dylan, Wilco, My Morning Jacket, John Mayer, Allman Brothers Band, Zac Brown Band, Dave Matthews Band, Steely Dan, Steve Winwood, Punch Brothers, G. Love & Special Sauce and Citizen Cope. In addition to Cal’s solo career, Cal often performs with his band as “Cal Kehoe & Brother Moose”. The band plays original music that has been compared as a blend of Phish, Red Hot Chili Peppers, Pearl Jam and the Grateful Dead.
Look out for Cal and his band performing throughout the North East through the end of 2016, with a National Tour on tap for early 2017. The new EP, Batting Practice, is available on all digital outlets now, and features his first single, “Fiasco”.