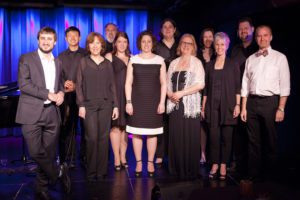 Formed in 1995, Uncommon Chord is an SSATB pop-jazz vocal ensemble in New York City comprised of eleven accomplished vocalists who sing contemporary music for the love of it. Our repertoire ranges from the music of Duke Ellington, George & Ira Gershwin, and Johnny Mercer to that of the Beatles, Nora Jones, and Dave Brubeck. We perform both a capella and accompanied, including those of the Real Group, NY Voices, and Gene Puerling. 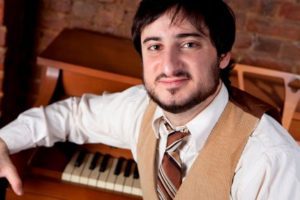 Scott Stein is an Upper West Side-based pianist, songwriter, composer, arranger and conductor. Born and raised in Akron, OH, Scott received his B.M. in Composition from The Ohio State University. A New York resident since 2007, Scott currently conducts four vocal groups including the Manhattan chapter of HaZamir: The International Jewish High School Choir. He has served as the music director for several theater productions around the city including productions at Ars Nova and the NY Live Arts Center. Scott is also a singer / songwriter of note, appearing frequently at NYC clubs including Rockwood Music Hall and The Living Room. His latest project is a 9-piece, multi-voiced chamber-pop ensemble dubbed Scott Stein and His Well Groomed Orchestra, whose debut recordings will be released in early 2014. For more information on Scott’s various endeavors and conquests, visit www.scottsteinmusic.com.

Nancy Parish, Soprano I
Nancy works as a singer, pianist, organist and teacher. She has sung with Bronx Opera, Village Light Opera, New York Grand Opera, in off-off Broadway choruses, and in venues such as Carnegie Hall, Constitution Hall (Washington, DC), Royal Albert Hall (London) and the Vatican. She has performed as a member of Chorus Angelorum, touring Europe and South America singing liturgical music. Other small group ensemble experience has included the a cappella groups Women Singing and Uptown Sound.

Claire Slemmer, Soprano I
Claire is from Ohio and has been living in New York for 5 years, 3 of which she has been happily singing second soprano with Uncommon Chord. When she’s not singing, Claire is an actress, presentation coach, wedding officiant, and pastoral care volunteer. She is the resident student at Ordinary Mind Zendo.

Julia Lunetta, Soprano II
Julia is a professional geek, a semi-professional actress and musician, and an amateur human. A recent arrival to NYC, she can be found haunting piano bars around the city, and regularly traveling back to her beloved Boston.

Tammy Weinfeld, Soprano II
Tammy is thrilled to be singing with Uncommon Chord. She studied voice, clarinet, and piano at Case Western Reserve University in Cleveland, Ohio. In New York City, she has performed with the New Amsterdam Singers, Park Avenue Synagogue Choir, and various chamber music ensembles at the 92nd St. Y. Tammy has worked as a Speech-Language Pathologist for the last 20 years, specializing in adult rehabilitation. She happily lives in Manhattan with her husband, son, and daughter.

Eva Nicole, Alto
Eva has been acting and singing in New York City for over 10 years. She has performed at several venues throughout the city, including Carnegie Hall and Symphony Space.

Teri Wade, Alto
A native New Yorker, Teri has performed with several choruses and music groups in the New York area, including Central City Chorus, the Marble Collegiate Church Festival of Voices, and One World Symphony. She is the founder and principal of Mission & Message Communications, a consultancy that specializes in communications and marketing for nonprofits and growing enterprises, and also serves on the advisory council of the Arts & Business Council of New York, as well as on the board of Central City Chorus.

Norman Schwab, Tenor I
Norm is a born and bred New Yorker from the UWS. He is currently working as a stagehand building sets for Broadway shows. Norm has been singing with Uncommon Chord since 1999.

Peter Zinman, Tenor II
Peter has been singing with Uncommon Chord since the year 2000. When he is not being begged by his young son to stop singing in the house, he manages Gas Turbine Controls Corporation, an international energy equipment and services company. He also serves as Secretary on the Executive Board of the Men’s Division of the Albert Einstein College of Medicine, a charitable organization. On rare occasion, he finds time to work at his collection of vintage college freshman rules broadsides.

Dan Stoddard, Bass I
An original “charter” member of Uncommon Chord, Dan also sings with the New York Choral Society, where he has been a member on and off since 1979. When not singing, Dan spends his days at the American Museum of Natural History, where he is Vice President and Chief Investment Officer. Dan loves jazz, and the American songbook classics. He also likes classical music, 60’s rock, and opera.

Henry Hsia, Bass II
Henry is a native and life-long New Yorker who has sung in venues (and showers) across the nation and around the world. His motto as a member of the bass section: “I am always beneath you, but nothing is beneath me!”

Candidates for Uncommon Chord must have past experience singing in tight harmony and with advanced level vocal groups in order to schedule an audition. Our concerts are usually half a capella and half accompanied. We schedule at least two concerts a year, usually in June and December. Repertoire for concerts is performed memorized.

The group rehearses every Monday evening on the upper west side of Manhattan and is self-funded, meaning the members contribute a small amount each week to sustain the ensemble. Members are non-professional vocalists who perform at a professional level. Interested candidates should be willing to invest a portion of time each week preparing for rehearsals and concert repertoire.

Uncommon Chord is currently accepting auditions for basses. If you are interested in singing with the group, please feel free to inquire about an audition at uncommonchord10@gmail.com.