(June 6, 2016) – The West Point Band is proud to announce its annual “Music Under the Stars” 2016 summer concert series at the majestic Trophy Point Amphitheater at The United States Military Academy in West Point. Comprised of some of the finest musicians in the world, The West Point Band is the Army’s oldest musical organization and has been providing support and music to West Point and the nation since 1817. Guests of the Trophy Point “Music Under the Stars” concerts are welcome to bring picnics, visit the noble United States Military Academy grounds, and enjoy beautiful Hudson River views while The West Point Band performs a wide variety of world-class music. These concerts are free and open to the public. 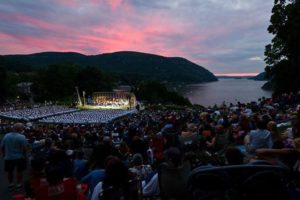 On Saturday, June 11 at 7:30 p.m., The West Point Band will celebrate the Army Birthday with the program “Who More Than Self Their Country Loved,” which will commemorate 241 years of selfless service to the nation. In true birthday fashion, the performance will kick off with a streamer ceremony and end with a cake-cutting.

For concert information, cancellations and updates, call 845.938.2617 or visit www.westpointband.com.