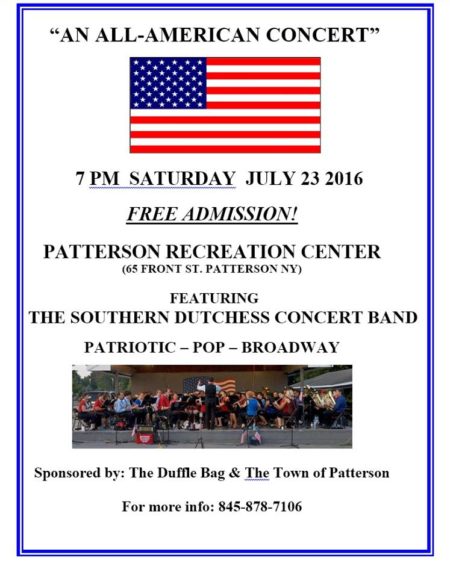 (July 18, 2016) – On Saturday, July 23rd, the Patterson Recreation Center will be the venue for a family-friendly “All-American” concert by the Southern Dutchess Concert Band and sponsored by Brian Benedict and The Duffle Bag. The concert starts at 7 p.m. and admission is Free.

For this fourth annual “All-American” Concert, the Southern Dutchess Concert Band will be performing patriotic tunes, including Irving Berlin’s “God Bless America”, Broadway showstoppers, including a medley from “The Lion King”, Hollywood favorites, including a medley from “Frozen”, selections by famous American composers, including Aaron Copland’s “Appalachian Spring”, popular standards, including Cole Porter’s “Anything Goes”, and, of course, rousing marches, including John Philip Sousa’s “The Stars And Stripes Forever”! Also included will be a tribute to the 75th Anniversary of Pearl Harbor, titled “December 7th, 1941”, and a special salute to American military service members, veterans and their families. 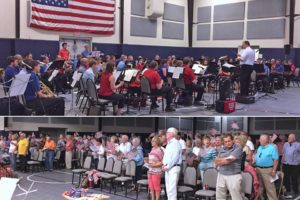 This concert is sponsored by The Duffle Bag, a family owned and operated business located on Route 311 in Patterson offering military products and services to the entertainment industry and the public for more than 30 years.