Roots-rock singer-songwriter Anders Osborne has garnered a closet-full of awards on the highly competitive New Orleans music scene. Guitar Player calls him “the poet laureate of Louisiana’s fertile roots music scene.” New Orleans’s Gambit Weekly recently honored Osborne as the Entertainer of the Year. OffBeat named him the Crescent City’s Best Guitarist for the third year in a row, and the Best Songwriter for the second straight year. Osborne also won Song of the Year for his composition, “Louisiana Gold.” He can even be seen performing in an episode of HBO’s New Orleans-based drama, “Treme.” 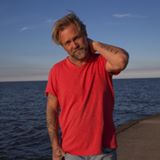 Osborne fell under the spell of Bob Dylan, Ray Charles, and other American musical icons as a teenager. Since relocating to New Orleans from his native Sweden in 1985, he has distinguished himself as a songwriter – penning tunes for Keb’ Mo’, Brad Paisley, Tim McGraw (the number one hit “Watch the Wind Blow”) and others – and a singer of the highest order.

Following his recording debut in 1989 he has crafted a series of increasingly honest and adventurous albums culminating in his most recent, “Flower Box.”