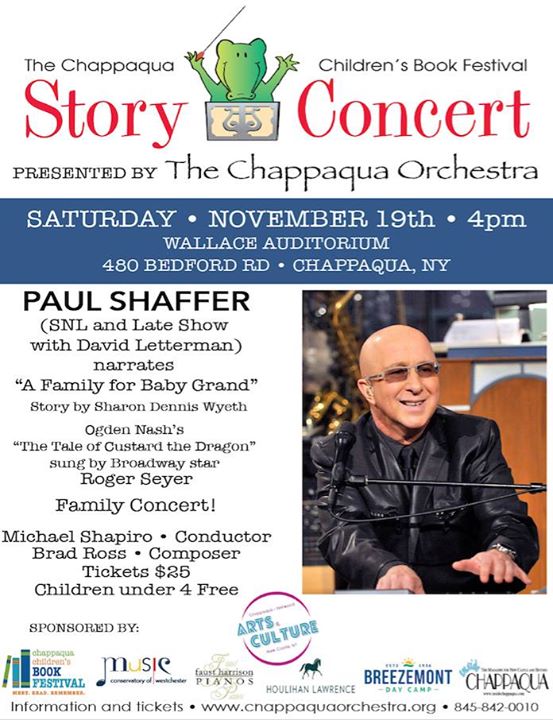 Tickets are $25 (children under 4 free). To purchase Tickets CLICK HERE.

ABOUT THE CHAPPAQUA ORCHESTRA

Hailed as “The Jewel of New Castle”, The Chappaqua Orchestra has served Northern Westchester since 1959. Now under the baton of Michael Shapiro, the orchestra plays diverse and challenging programs and has grown into a sophisticated ensemble of professional level artists.

TCO began as the Chappaqua Chamber Orchestra and was founded by a small group of musicians and music lovers, among them Dr. Boris Koutzen, the distinguished violinist, teacher, and composer, who quickly agreed to take up the baton. The February 7, 1959 premiere performance firmly established the orchestra’s reputation for musical excellence. On stage were a baker, a lawyer, a doctor, a stockbroker, a minister, an artist, a postman, homemakers, music teachers and professional musicians – all of them exceptional performers. TCO also has a proud history of collaboration with young soloists who later went on to stardom, many of them proteges of longtime Music Director Norman Leyden, who also conducted the Westchester County Youth Orchestra.
From 1967 when Norman Leyden, principal oboist, composer, and teacher, became the next in a series of distinguished conductors, the orchestra continued in its commitments to quality music and to the communities of New Castle and Northern Westchester. The establishment, also in 1967, of the Boris Koutzen Memorial Fund provided income to commission original works to be premiered by TCO. The first Koutzen Fund commissioned work, Thanatopsis, by Paul Creston, was performed in 1971. In 2002, a generous gift from two anonymous donors made it possible for the Fund to once again commission an original work. Michael Shapiro’s original score to the 1931 movie Frankenstein received its world premiere in October 2002 at the Jacob Burns Film Center.

In 1970, Wolfgang Schanzer, pianist and opera conductor, became conductor. He remained on the podium of TCO for 12 exciting years. Then in 1984, Andrew Litton, who at the time was an internationally renowned pianist, was engaged as conductor. Mr. Litton, of course, has gone on to preside over several of the best known orchestras of the world, including the Dallas Symphony. From 1987 through 1989, the orchestra continued under the direction of Jesse Levine. During this period the orchestra increased in size and was briefly called the Chappaqua Symphony. The orchestra also evolved from a volunteer community orchestra to a semi-professional organization. Unfortunately this transition proved costly to the orchestra, and TCO struggled financially. In 1992, James Sadewhite became conductor. During his tenure, a benefit concert featuring Vanessa Williams, whose star power filled the Horace Greeley High School Auditorium to capacity, revitalized the orchestra’s finances..

The Chappaqua Orchestra is proud to have the support of a devoted and enthusiastic Board of Trustees. The Board welcomes new members and volunteers who are dedicated to producing high quality music in the Northern Westchester area, promoting local musicianship and creating music lovers for the next generation.

This special event will take place at the Wallace Auditorium in Chappaqua.