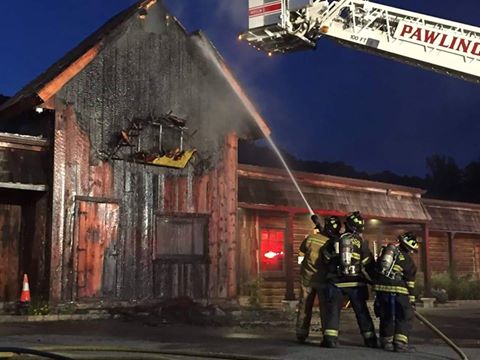 (July 4, 2016) – An early morning fire at Daryl’s House Club in Pawling on the 4th of July was contained within 20 minutes, limiting damage almost entirely to the building’s exterior.

Despite many volunteer firefighters out of town over holiday weekend, the Pawling Fire Department and neighboring companies worked together to attack the blaze swiftly, and quickly.

Daryl Hall issued the following statement: “Last night about 4:00 AM , there was an electrical fire , apparently emanating from the sign on the facade of the club. It was extinguished by about 5:00 AM. The damage was minimal and only the exterior barn boards were burned or scorched. Absolutely NO damage occurred to any other part of the building or any part of the interior. We should be up and running as normal this week. Thanks to all concerned – Daryl”

An initial investigation has deemed the fire not to be suspicious in nature.

Daryl’s House Club evolved out of Hall and Oates star Daryl Hall’s popular Live From Daryl’s House series. and is located on Route 22 at the building that formerly housed the Town Crier.