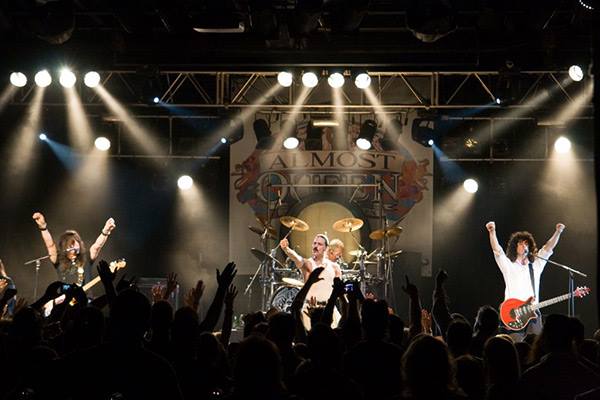 Almost Queen succeeds in blending the vocal layering and studio precision that is a signature of the band with the energy and spectacle of a live stage production. Elaborate lighting, effects and costumes aptly frame the seasoned musicians who step into these very large shoes to effectively render an authentic “Queen experience”. The band can boast an unbroken string of sold out theaters from New York to San Diego, while headlining major rock festivals in a number of foreign countries as well as the US. The showmanship on stage is reflected by the extensive resumes of the band members, who have toured with the likes of Thin Lizzy, Dee Snider, and Angel. Lead singer Joseph Russo, is also a veteran of the Broadway stage, and has performed in several Broadway tours throughout the world. He and the other Almost Queen members Steve Leonard, John Cappadona, and Randy Gregg flex all of their musical chops in proudly presenting to you the penultimate live Queen concert.