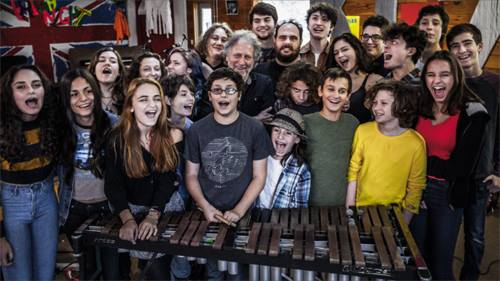 Paul Green, founder of School Of Rock, has been teaching kids to play rock music and, more specifically, Frank Zappa rock music since 1998. The subject of the documentaries Rock School and Woodstock: Then And Now, and the inspiration for the Jack Black character in School Of Rock, Paul’s students play at Lollapalooza, Carnegie Hall, CBGBs and Austin City Limits, among many others. They have shared the stage with Perry Farrell, Jon Anderson, Gene Ween and Alice Cooper, to name a few. Nearest and dearest to his heart is the work he has done to help keep Zappa music alive through his inclusion of Frank Zappa in the School Of Rock and, now, Rock Academy curriculum. Paul’s students have played Zappa music all over the country and in Europe, including 5 appearances at the prestigious Zappanale festival in Germany. Students of School Of Rock have played this wonderful music alongside Zappa alums Ike Willis, Napoleon Murphy Brock, Denny Walley, Adrian Belew and Mike Keneally …and now are proud to kick off a year long collaboration with Ed Mann.

No other musician had a longer tenure in with Zappa or appeared on more albums than Ed Mann. Being the percussionist in Frank Zappa’s band meant playing all the hardest lines and rhythms while also supplying a batterie of acoustic and electronic sounds, and Ed did so with great skill and aplomb. He also served a stint as “clonemeister,” running band rehearsals for Zappa in his absence. Ed has had a very rich and varied post Zappa career: teaching music at colleges; recording for the top film composers in L.A.; working with pop stars such as Rickie Lee Jones, Kenny Loggins and Andy Summers; facilitating group music making courses on Native reserves in Canada; and pioneering the development of holistic sound therapy. In 2012, Ed began the performing with various luminaries in the Jam Band circuit as electronic mallet keyboardist, percussionist and sound artist. Also —and most importantly— Ed Mann is a great and very friendly guy.