(July 21, 2016) – Foxwoods Casino Resort, in partnership with Q105 is holding a five month long Battle of the Bands at the resort’s Atrium Bar and Lounge. With thousands of bands submitting their music, only 20 bands were selected to attempt to capture the Grand Prize of $10,000 – including The Jason Gisser Band.

The Jason Gisser Band has been making waves throughout the entire Hudson Valley for some time. Their original music has resonated with many, and has garnered the attention from many high profile artists and venues. The band has opened for Grand Funk Railroad, Three Dog Night, and Lukas Nelson & Promise of the Real. 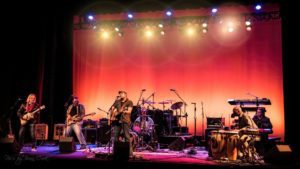 Considered the underdog of the competition, on July 20 the band competed in a toe-to-toe battle to move on in the competition. The band’s unequivocal ability to take the audience along on their personal and emotional journeys through their music, talent and lyrics continued to resonate.

Gisser has been very open about the deeply personal messages that are portrayed in his music. In fact, Gisser’s “All of You” was penned when he was only 13 years old and describes his struggle with depression. The band performed the song in this week’s battle, and brought audience members to tears. In fact, many attendees approached Gisser after the show and shared their own personal stories about struggling with depression.

The band also performed their own versions of Bill Withers’ “Ain’t No Sunshine” and The Animals’ “House of the Rising Sun”. After the show one of the battle judges approached Gisser and stated, “I can’t stand when people play those two songs. However, when you guys did it I really felt it. It was by far the best versions I have ever heard of those songs.”

The band anxiously awaited the announcement of the winner. According to Gisser, the very talented competing band (The Secret of Sound) “made it a true contest.” In the end, The Jason Gisser Band was slated as the winner of the first round.

The next round will take place on August 31 at The Atrium Bar and Lounge at Foxwoods. Fans are invited to come out and support them, and someday say “I knew them when….”

The band will be headlining at Daryl’s House Club in Pawling on August 3. Tickets are $10. To purchase tickets, CLICK HERE.

To learn more about the band, listen to their music and find upcoming shows, check out the band’s website by CLICKING HERE.