“William Parker is something of a father figure.”
— Larry Blumenfeld, New York Times
“One of the 50 Greatest New York Musicians of All Time”
— Time Out New York
Launching a new series of music and cultural discourse at the Atlas Industries building in Newburgh, NY, Jazz at Atlas is proud to present the legendary bassist, composer and bandleader William Parker and the ensemble Evidence Of Everlasting Beauty. The band features Cooper Moore on piano, Daniel Carter on reeds, trumpet and flute, Steve Swell on trombone and Mr. Parker on stringed instruments. Evidence Of Everlasting Beauty will perform on Saturday, May 20 at 8 PM. Admission will be $20 at the door.
All programs will take place at the Atlas Industries building located at 11 Spring St. in Newburgh, NY. Ample onsite parking is available.
Jazz at Atlas is a cooperative effort of trombonist and bandleader Joe Fiedler; writer, musician and multimedia artist James Keepnews; and music researcher, radio host and producer Ben Young. Along with presenting performances of world-renowned creative musicians, JAA will also be offering listening sessions, dialogues with artists and classes covering the entire spectrum of creative music in all its varied manifestations around the world and throughout its history.
Upcoming JAA concerts include:
Friday, July 28 — Joe Lovano: “In the Moment of Now”
Thursday, September 12 — Tim Berne’s Snakeoil: featuring Oscar Noriega, Matt Mitchell and Ches Smith
Upcoming JAA classes include:
Introductory open session — Thursday May, 18 at 6:30.
Jazz 101 — a free 8-week course beginning May 25 and running weekly every Thursday through July 13 from 6:30-8:30 PM.
Please follow Jazz at Atlas on Facebook: https://www.facebook.com/Jazz-at-Atlas-437672509911654/
Jazz 101 is an eight-week listener’s introduction to Jazz music, as heard through century of Jazz history. The course is designed for absolute newcomers—demystifying in simplest terms how the music works and how it has evolved. Jazz 101 is suitable for adults as well as middle-school and high-school students.  The course has no test, no homework, no entrance exam, and, in this offering, has no admission fee; just bring your ears! The course has been offered for more than a decade at Jazz at Lincoln Center, and is now being piloted outside of New York City.
Biographies:
William Parker is a bassist, improviser, composer, writer, and educator from New York City. He has recorded over 150 albums, published six books, and taught and mentored hundreds of young musicians and artists. 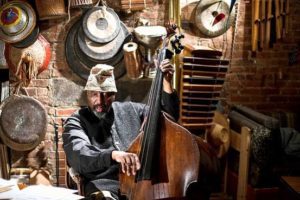