(March 6, 2017) – On Monday, March 20, the community is invited to celebrate The Mod Squad NYC’s CD release party at Quinn’s in Beacon. Beacon is the official home of the making of the band’s debut record – recorded at Cassandra Studios.

During their last appearance at Quinn’s this band completely destroyed any conception of what had been thought of the style of music Nioka and crew were currently focusing on. Elements and ingredients of all types/genres of music reaching back through the span of art and history created something so multi-lingual and expressive that it could only be related through the beauty of the shared experience of the music they perform. Eminating influences from the Baroque to the Folk and everything outside and in between, this concoction has been described as highly enjoyable and certainly not to be missed. 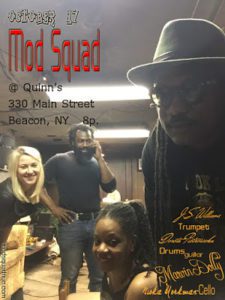 ABOUT THE MOD SQUAD NYC

This New York City band is a fresh creation of new technical wizardry whose ideas have evolved from the new school of Jazz, Fusion and with a cool breath of life the Mod Squad brings new music, trance, grooves and visionary collective thought to delight your ears.

The band has played 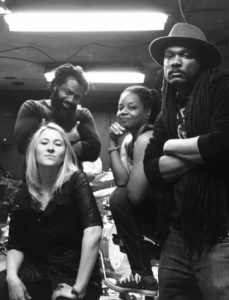 The show will begin at 8:30pm. While there is no cover, attendees are asked to give a generous donation to be given to the band.