(May 17, 2016) – The Paul Green Rock Academy in Woodstock has announced a very unique opportunity this summer for kids who love music as much as we do. The intensive programs include programs for all skill levels and each program enables kids to learn directly from the pros.

Spots are extremely limited, and some of the programs may already be booked, so please contact the school if you have any questions.

Gibby will take two groups of kids, one younger (ages 6-10) and one older (ages 11-18) and delve into making music with all manner of instruments, electric, electronic, or otherwise. He will augment the student’s natural creativity by introducing them to exotic instruments and electronic doo-dads, as well as manipulating the recording medium itself. Students will receive a CD of their work at the end of the week.

Gibby Haynes is the lead singer of legendary punk band The Butthole Surfers, but don’t let that name fool you…he is a big sweetheart and he loves teaching kids. Gibby worked with the School of Rock kids for over a year when Paul Green was still there and the results were sublime. He now comes to the Woodstock to share his unique brand of unbridled creativity.

Andy will work with the kids to construct their own songs, showing them chords, grooves and different approaches, then take them through the arranging process. There will be a performance at the end of the week to showcase their creations.

Andy Shernoff is the bassist and songwriter for the the American proto-punk band, The Dictators. His songs have been recorded by Rock and Roll Hall of Famers the Ramones and Dion DiMucci as well as over 60 other acts. His music can also be heard in movies and TV shows like Kindergarten Cop and Buffy the Vampire Slayer.

Simi, along with her assistant Elizabeth Mitchell, will guide students through the songwriting process, from finding inspiration to arrangement to adding vocal harmonies. Then she will help students find their creativity in the delivery of their own words. There will a performance at the end of the week.

Simi Stone is a performer, violinist, guitarist, singer and songwriter. Born and raised in Woodstock, NY – She has recently released her first self titled solo album , with producer and songwriting partner David Baron (Meghan Trainor, Lenny Kravitz, Michael Jackson) out now on Reveal Records. She has performed and toured in her own bands’ Suffrajett and The Duke and the King and worked with other artists Including Connor Oberst, Dan Zanes, Simone Felice, Elizabeth Mitchell, Natalie Merchant, David Byrne, The New Pornographers and filmmaker Gregory Colbert.

Tracy will create a string ensemble that performs works from acts such as Arcade Fire, Portland Cello Project, Led Zeppelin, Radiohead, Devo and the Talking Heads. All stringed instruments welcome.

Grammy nominated, classically trained, alternative rock musician Tracy bonham has played violin with the likes of Jimmy Page and Robert Plant, Jay Z, Aerosmith, Blue Man Group, among other acclaimed national acts. She has developed a rock-strings program in Woodstock, Brooklyn, and Eugene, OR where she teaches kids and adults the art of playing, and arranging for, classical strings in a rock setting. Her latest album, Wax and Gold, was released in 2015.

Jason will teach students the art of percussion and how to incorporate dynamics, power and speed into their playing. Students will spend the week learning selected percussion ensembles with a performance at 2pm on Friday for the parents.

Jason has been working as a professional musician, producer and teacher for over 30 years.

Dr Know will take your child through the art of the jam and song creation, showing them how to blend sounds and grooves for maximum effect on the students’ own original compositions. He will be assisted by former Robert Fripp student Matthew Henderson. There will be a concert on Friday at 2:00pm for the parents.

Dr Know is the guitarist for Bad Brains as well as performing with Mos Def’s Black Jack Johnson. The Bad Brains are widely regarded as one of punk rock’s most innovative and important bands.

Zappa percussionist and electronic sound designer Ed Mann leads the group through the creation of grooves, riffs and soundscapes, drawing influences from Funk, Reggae, Rock, Afropop and Dub. The focus is on learning and improvising with basic rhythms, interactive parts, chords/leads and the use of sound effects to create long-form jams. There will be a performance at the end of the week, and all instruments are welcome.

Ed Mann was percussionist, sound designer and keyboardist in Frank Zappa’s bands from ’77 to ’88 and has performed or recorded with a diverse range of artists from Hollywood film composers to Andy Summers (The Police) as well as a long list of bands in the jamband circuit. He appears on over 100 recordings including 30 with Zappa.

Brendon Small, creator of Metalocalypse and Home Movies, as well as the voice and guitar of legendary metal band and cultural phenomenon DETHKLOK, comes to our town to teach our children about the finer points of that true american art form: HEAVY METAL. This camp is for students aged 12-18, and all enrollees must have some musical experience. Students will be placed into their own bands and then educated in what goes in to making true metal music: from naming one’s band, to writing songs, arranging the material, performance of said material, the importance of shredding for shredding’s sake, and talking to girls after the show. There will be a performance at the end of the week for family and friends.

Brendon is co-producer, co-writer, composer, and voice actor for the Adult Swim series Metalocalypse. The series focuses on a fictional death metal band named Dethklok, and each episode features a song “performed” by the band.

A week-long immersion into playing in a rock band, participants will experience hands-on instruction in being a member of a group. We will listen to and watch some of the most influential groups. A final performance under the tent will be the week’s goal. Campers will produce a professionally recorded CD of the material they have learned during camp!

This session is open to guitarists, drummers, bass or keyboard players, and any other instrumentalist interested in playing rock music.

Peter Dougan has been playing guitar for over 20 years and teaching for more than 15. He attended Ithaca College and received a degree in Jazz Performance. Peter then went on to receive a Masters Degree from Berklee College of Music and The Boston Conservatory. Along the way, he has performed with many groups in styles from Funk to Afro Cuban to Blues and Roots Rock.

Please download the camp signup forms or email the school directly at info@rockacademy.com for details or to sign up.

The Paul Green Rock Academy is located at 1293 Route 212 in Saugerties. 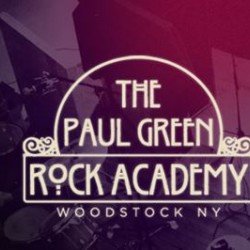