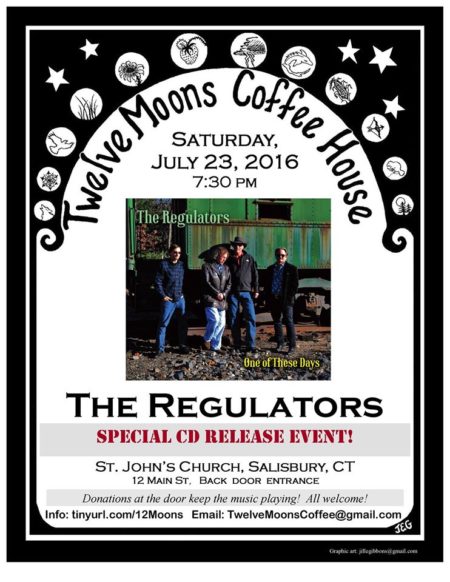 (July 22, 2016) – On Saturday, July 23, Twelve Moons Coffee House in Salisbury, CT will host a special event featuring The Regulators, four veterans of the Connecticut music scene, with a repertoire consisting of roots rock, country and Americana. The event will begin at 7:30 PM and will celebrate the band’s release of their latest CD, ‘One of These Days’.

To listen to The Regulators: https://www.youtube.com/watch?v=NSOpN-cKLaM

This is a Special Event at Twelve Moons Coffee House which is usually held on the first Saturday of each month, at St. John’s Church (back door entrance) 12 Main St., Salisbury. A donation is requested to help cover expenses.

For more information, contact TwelveMoonsCoffee@gmail.com. Weather permitting, the event will be held outdoors.