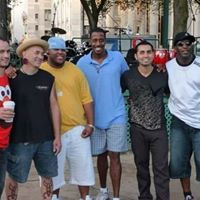 Boogie Chillun has been rockin’ and funkin’ the CT music scene since 1991, performing at nightclubs, theaters, outdoor festivals, schools, parties, weddings, and other events throughout CT and the US Northeast. That’s over twenty years of good music satisfaction!

Boogie Chillun has performed in over 3000 concerts, including opening for major artists such as The Spinners, WAR, Ziggy Marley, Vanilla Fudge, 98 Degrees, and The Sugar Hill Gang.

After surviving numerous personnel changes over the years, the band has stabilized and it continues to evolve and flourish. Boogie Chillun still performs at clubs, parties, and outdoor festivals, but the band does its most satisfying work in schools, presenting the “American Roots Music” program to children all over Connecticut.

Boogie Chillun released two albums on the independent Turtle Records label: “Live Together” (1993) and “Funky Haven” (1999), as well as two singles in 1999, “Make It Happen” and “Be A Rock,” which received major local airplay on New Haven radio giants WYBC and WPLR.

Boogie Chillun also released an album on the Retro City Records label in 2012, “Funk Upon A Rhyme,” which chronicles 20 years of songwriting and recording by the group’s principals, Vaughn Collins and Derek Graham. The band also released the single “Read, Baby, Read” to young audiences, and will soon release its fourth studio album, “WorldFunkHipHopSoul,” which will further demonstrate the band’s unique hybrid style.