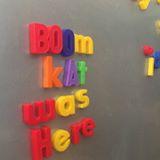 Introduced by a mutual friend as “the only two Dylan fans he knew,” Ann and Paul Byrne immediately began their musical journey together. Within a year they were booked solid, stashing away cash for their inevitable wedding. What else were two Dylan loving, guitar playing, singer-songwriters to do?

While talking with some friends before a gig, the ever-kind and smiling Larry Lopez walked by and said, “Are you guys taking about Wilco?” Once Larry was in, we had one more task: name the band. Larry delivered.

Professionally, the members of Boom Kat have been the supporting act for countless shows at the areas most prestigious venues right down to the smallest, most rowdy, rough and tumble beer slinging bars on the roadside. If you’ve come to see Boom Kat, you’ve made new friends. What they do is make the “stage” disappear. By the middle of the night the entire venue becomes the stage and we are all part of the show.