Brothers of the Road Band 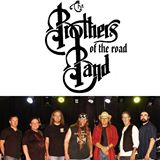 Since 2006 The Brothers of the Road Band have been performing at venues large and small for thousands of Allman Brothers fans from New England to Georgia. Performing arrangements of tunes from the early years through the Derek/Warren line up. The band gets its inspiration from studio recordings, live recordings, and modern “Instant Live” recordings including arrangements of Dickey Bett’s Blue Sky and Rambling Man as performed by Dickey Betts & Great Southern.

“The most authentic Allman Tribute you will ever hear” -Tuxedo Junction Danbury CT. “We closed our eyes and it was 1969 all over again” -Monroe Georgia Summer Concert Series. “The worlds best Allman Brothers Tribute” -Nelson Ledges Park Garrettsville Ohio, “The Brothers of the Road Band it’s like being at the Beacon Theater in March” -Maria Milito Q104fm Classic Rock NY, “The Allman Brothers would be proud” -Yonrico Scott Derek Trucks Band