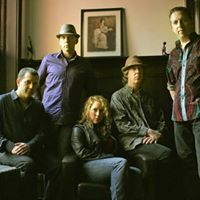 Daisycutter is the “downtown upstate” culmination of the NY musical melting pot in action. They combine a wide-screen city view with a bracing dose of rural realism into a searing mix of indie roots-rock and alt-country.

Frontwoman/ singer/ fiddler/ songwriter Sara Milonovich has also been a highly sought-after accompanist in the rock, folk, bluegrass, americana, and celtic music worlds, and has performed and recorded throughout North and South America, Europe and beyond. Growing up on a working farm in rural upstate New York, she began playing when she was four, and by nine was leading her own band (around the same time she learned to drive a tractor.) After a collection of awards for fiddling, singing, songwriting, and composing, she left school at sixteen to hit the road with NY bluegrass band The McKrells. A diverse trajectory led her from there through a busy career as an accompanist and collaborator with such artists as Richard Shindell, Pete Seeger (on his Grammy-winning At 89 album), Eliza Gilkyson, and Mountain Quickstep, among others, while simultaneously earning a degree in Biology from Cornell.