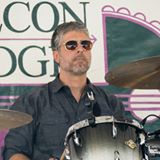 Eric Puente grew up in Rome, NY, and has been playing drums, in several different forms and styles, his entire life. He has been a session drummer/percussionist, in the NY music scene for the past 20 years, recording, touring, and arranging, with various rock, jazz, folk/americana, and orchestral ensembles. He has studied with John Riley, Joe Morello, Mike Clark, Tony Jefferson, and Joe Cusatis.

The Grand Slambovians ==> Eric has been a Slambovian musical friend for several years, and in March 2012, he started performing with Joziah and Sharkey on the NYC Broadway play “Aesop’s Fables” (for which Joziah wrote the musical score). Since then, he has been touring and recording on a fulltime basis with the Slambovians.