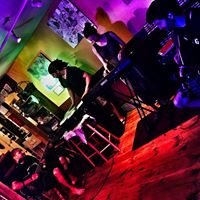 H was originally formed in 2009 in New Paltz, New York. Ambiguous as the band name, H’s sound is a complex, psychedelic array of cascading reverberations. Utilizing a plethora of odd and changing time signatures, their polyrhythmic sound undulates audiences into hypnotic trances. Drawing influence from the likes of Tool, Pink Floyd, Primus, Black Sabbath, Rage Against The Machine, Cream, King Crimson, Frank Zappa and others, H’s diverse sound emanates from founding members Brad Gorfein on bass and Joseph Contento on guitar while Josh Towers of The Kairos and Exit 17 reigns from the throne of the drums. Tierney Greene from Shy Spy has recently integrated herself on the key boards.

After a four-year falling out with music, Gorfein picked up an electric bass thinking “it’s a cello turned sideways, how hard could it be.” He then spent the next several years crafting his sound until he met Contento in college. There, their influences and styles began to fuse as they educated each other on different areas of music theory that would later become integral to the project. Meanwhile, Towers first discovered the band at Forest Fest 2012 while Jeremy Truit of Just the Tip sat in the seat left vacant by the band’s original drummer, Mike Conway, who had moved west to study sustainable agriculture. Towers was drawn like moth to a flame, enchanted by the band’s music as it wafted over the hill and cut through the EDM that was playing on the adjacent stage. It wouldn’t be until two drummerless years later at an open mic night at the legendary Snug Harbor in New Paltz when Gorfein asked Towers to fill in for an auditioning drummer who didn’t show that H’s lineup would be cemented. That performance was Cinderella’s foot slipping into the glass slipper. Since then, H have been reworking songs performed with previous iterations of the band while sculpting the remaining material for their forthcoming album.

With the summer full of shows in the Ulster County area, H are focused on getting a good live recording that exemplifies their dynamic and improvisational sound while also looking to branch out with gigs in the surrounding. After receiving an overwhelmingly positive response from their first acoustic set at the People’s Cauldron, they are also making arrangements to record an acoustic album.