Formed in the wake of legendary music stemming from the nearby village of Woodstock, the Saugerties, NY based indie/alt/rock band, Hudson’s Crew, are demanding attention. A large task in a region steeped in musical greatness. 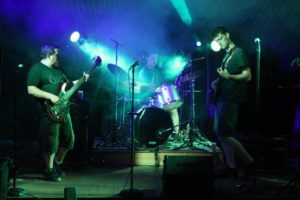 Hudson’s Crew was formed in 2011 by cousins, Matt on guitar/vocal duties and Paddy on drums. In early 2012, Paddy’s uncle, Bob, was tapped as the band’s new bass player. That autumn, the band recorded a very successful EP, ‘Launched’, with producer/engineer Jim Barbaro, which immediately caught the attention of producer/percussionist Jerry Marotta (Peter Gabriel, Orleans).

The Crew’s efforts are focused on supporting their new album, continuing to perform live, writing new material, honing their musical skills and pushing to get their music heard. They continue to gain recognition as evidenced by a heavy gigging schedule in 2015 and playing at venues such as The Chance Theater, the Rosendale Street Festival, Children of the World Festival, Clarkson University, the New York City Marathon and the legendary Bearsville Theater.