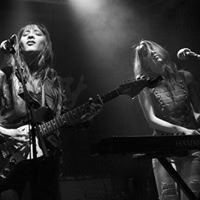 Getting music fans to agree on anything is next to impossible. That’s why the quick rise of twin sisters, Nalani & Sarina — from a small town in west-central New Jersey to national notoriety and recognition — is such an astounding story. These two audacious young artists have developed a distinctive blend of traditionalist soul-rock and modern pop, and their stylistic alchemy is likely to keep their faces in the spotlight for years to come. Legendary music critic and Sirius radio host Dave Marsh, recently called their latest EP, Scattered World, the singing duo’s latest set, “some of the best music being made in 2016”, and fans, critics and taste-makers have echoed his praise. The pop marketplace can be fickle and fractious, but Nalani & Sarina have all the elements in place for success and stardom.

You might say that Nalani & Sarina were born in stereo: they’re identical mirror twins. Nalani plays her guitar right-handed; Sarina is a lefty. When they’re both singing and strumming, it feels like the song has come to greet the listener with arms wide open. Their captivating look is on display in the video for “Get Away”, a propulsive cut from Scattered World that recently won The Freshmen contest on mtvU, and remains in regular rotation on the channel. In the clip — and in their stage show, too — Nalani & Sarina present themselves with the swagger and confidence of established stars who know they’ve got something essential to share.

Of course, their good looks wouldn’t matter at all if they couldn’t back it up with musical accomplishments. The sisters have been writing and singing together since they were kids — they’ve had a lifetime to refine the act, and on Scattered World, their skills are apparent. Nalani & Sarina play several instruments, including guitar, piano, and ukulele, and their singing voices are simultaneously forthright and alluring. Songs like “We’ll Be Free” and “Runaway” demonstrate a deep understanding of the architecture of classic pop and soul, and the rapid-fire delivery of “Get Away” suggests mastery of contemporary sounds, as well. Their smart, kinetic live show has made the sisters favorites on the Northeastern club scene: they’ve graced stages at Philly’s World Cafe Live and Milkboy, the City Winery, Rockwood Music Hall, and the Bitter End in New York City, The Saint in Asbury Park, and at regional music festivals like Musikfest (Bethlehem, PA), Black Potatoe Festival (Clinton, NJ), and Ladybug Festival (Wilmington, DE).